* Disclosure of Material Connection: I am a member of Vade Mecum Book Blog Tours and a copy of this book was provided to me by the author. Although payment may have been received by Vade Mecum Book Blog Tours, no payment was received by me in exchange for this review. There was no obligation to write a positive review. All opinions expressed are entirely my own and may not necessarily agree with those of the author, publisher, publicist, or readers of this review. My Cozie Corner is not responsible for sponsor prize shipment. This disclosure is in accordance with the Federal Trade Commission's 16 CFR, Part 255, Guides Concerning Use of Endorsements and Testimonials in Advertising. 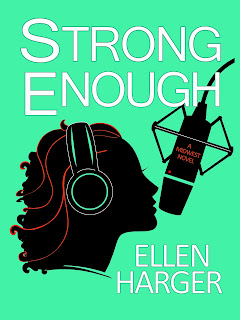 
Starting over is hard.

And sometimes, you have to burn a few bridges to do it.

Whitney Brown is average--average intelligence, average height, average weight--but she wants to be someone new. To kick-start her rebirth, she wears formal mourning, a black veil and vintage dress, to a wedding in her hometown, Woods Cross, a community that treasures family values. Is it an attack on marriage or has she just gone bonkers?

Emboldened but lacking a plan, she forces her foot in the door of a radio station in Sundown. A small metropolis of nearly 150,000, Sundown is a notch of urban flair along the Midwest's Bible Belt.

Getting in proves to be the easy part and the anonymity of being a DJ suits her well. But off air (and in person), Whitney must stand up to Sadi, an angry feminist and the bane of her college years while an old friendship with her former roommate, Leah, devolves around a guy.

It's 2002 and the Midwest radio scene is changing. Just as Whitney hits her groove, the radio station undergoes its own identity crisis. But what rocks Whitney to her core is the moment the condom breaks. Her abstinence only background leaves her embarrassed and facing a difficult choice.


About the Author, Ellen Harger:

Ellen Harger was born at the Air Force Academy in Colorado. As a military brat, she moved often during her childhood--something she never resented and continued as an adult. The constant starting over influenced her first published novel, "Strong Enough."

At 14, her family settled in Missouri as civilians, permitting Ellen to attend one high school. She stayed in the Midwest to attend a small liberal arts college, studying creative writing and art. After 11 years, she moved to Boston. While there, she continued to study creative writing in Cambridge. Ever willing to explore new places, she moved next to the San Francisco Bay area. After 11 years away, and loving the symmetry, she returned to the Midwest to finish "Strong Enough." She has published a poem, "Guidelines," and released her novel as an e-book.


Ellen pens "Strong Enough" a well written story about making decisions, starting over and friendship. Her main characters were realistic and believable, although there were many characters to follow I really didn't have that much trouble keeping up. A great debut novel that will keep you turning the pages.

I give "Strong Enough" a 4 star rating.