* Disclosure of Material Connection: I am a member of Reading Addiction Blog Tours. Although payment may have been received by Reading Addiction Blog Tours, no payment was received by me in exchange for this publication. My Cozie Corner is not responsible for sponsor prize shipment. This disclosure is in accordance with the Federal Trade Commission's 16 CFR, Part 255, Guides Concerning Use of Endorsements and Testimonials in Advertising. 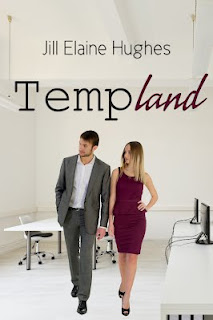 
The heroine, Melanie Evers, is a plucky young working-class woman from Akron, Ohio struggling to support herself in Chicago in the post-9-11 economy. TEMPLAND follows Melanie's journey through the temporary employment world from a college student on "just a summer job" to a 28-year-old woman with a lot of intelligence (and a heap of student loan debt to match) through multiple layoffs and a series of ever-more-wacky temp assignments, as she struggles not only to survive, but also to find romance and always remain true to the honest, working-class values instilled in her by her beloved grandfather.

In her long, solitary journey through Templand, Melanie encounters adventure and romance on her search for that always-elusive Permanent Job---which she finally gets, along with her man. TEMPLAND is a highly entertaining, wickedly funny social satire, contemporary romance, and mystery novel all rolled into one.


1. The author Jill Elaine Hughes wrote the book ten years ago during work breaks at — you guessed it — a temp job.

2. The book landed the author her first literary agent, circa 2004. Said agent shopped it all over the New York publishing houses, who liked it but turned it down because they said it lacked “shelf category” (i.e., there was no “New Adult” genre back then.)

3. The book was written before the Great Recession, but given the struggles today’s youth has with unemployment, underemployment, and a lack of good permanent jobs, TEMPLAND seems even more relevant today than when it was first written.

4. The author modeled the heroine Melanie’s grandfather on her own grandpa---or “Papaw,” as she likes to call him.

6. The heroine Melanie Evers’ sleazy ex-boyfriend Phil is fluent in Farsi. This is integral to the plot.

7. The book depicts many real locations and establishments in the city of Chicago, including the now-defunct Zephyr Ice Cream Restaurant.

8. The author had given up on getting TEMPLAND published until reader demand for New Adult titles about starting your career led her to give it new life through self-publishing — and reader interest has been amazing!

9. If you’ve never heard of Green River Soda before (a cult favorite in Illinois), you learn about it in this book.

10. Several of the wacky bosses and co-workers Melanie encounters on her temp assignments were inspired by real people the author met during her own temp-work stints.

JILL ELAINE HUGHES is a journalist and playwright  as well as a New Adult fiction novelist.  As a reporter,  she has contributed to the Chicago Tribune, Chicago  Reader, Washington Post, New Art Examiner, Cat  Fancy magazine, and numerous other media outlets.  Her plays have widely published and produced in  New York City, Chicago, Los Angeles, Seattle, Atlanta,  and many other U.S. cities, as well as in the UK and  Australia. Before self-publishing New Adult fiction,  she published many erotic romance novels under the  pen names “Jamaica Layne” and “Jay E. Hughes” for  publishers like Ellora’s Cave, Virgin Books, Decadent Publishing, and Ravenous Romance.