{Book Review} "On The Edge" by Dick Hannah

* Disclosure of Material Connection: I am a member of Sage's Blog Tours and a copy of this book was provided to me by the author. Although payment may have been received by Sage's Blog Tours, no payment was received by me in exchange for this review. There was no obligation to write a positive review. All opinions expressed are entirely my own and may not necessarily agree with those of the author, publisher, publicist, or readers of this review. This disclosure is in accordance with the Federal Trade Commission's 16 CFR, Part 255, Guides Concerning Use of Endorsements and Testimonials in Advertising. 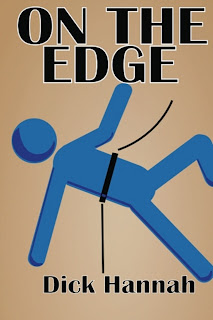 
After Joe Malone was run out of the Marines due to debilitating agoraphobia brought on by a fire fight Iraq he was forced to turn to his former Marine father for help. Having made some strides back to normalcy, Joe’s rocky relationship with his father is destroyed when he fires Joe after one their clients is found brutally murdered during a class at their military style fitness bootcamp. Things only get worse when a second client is murdered right in front of Joe three days later.  Joe is forced to decide what he wants more, the safety and security of staying at home working as a model builder for his old friend Kathy or the chance to reclaim his father’s respect and potentially own the bootcamp business by tracking down the killer. Determined not to let anymore of his friends get hurt, and desperate to return to his father’s good graces, Joe agrees to accompany a group of their clients on a trip to West Texas for a three day adventure race.

The challenges Joe expected to face are magnified during the train trip across Texas when he finds that his boss, Kathy, is along for the ride. The dangers continue to escalate the farther west they go, with Joe no longer sure of who to trust, with Kathy having to join a team on the race, and with his brother and father shadowing him across the state. Add to this that Joe’s own personal nemisis, Horne, shows up with his own team of adventure racers and is overtly trying to endanger Joe. Joe is forced to find the motivation to continue the trip, the personal dedication to overcome his fear of crowds and of open, even when his past and the associated memories keep rising to the surface and threaten all the gains he’s made since returning from the war. The adventure race is the least of Joe’s concerns. The rafting, climbing, rappelling, biking, running and other obstacles are nothing compared to the personal challenges Joe is forced to confront.

The race comes to an abrupt end when Horne is killed during the rappelling portion of the race. With his death, however, Joe is able to see the connection between all the murders and understands that it is two of his own clients who are the murderers. With Kathy and his father, Joe confronts the two murderers and is able keep them from escaping. The novel ends with Joe working full time for Kathy, eschewing his father’s business in an effort to break away from the manipulations of his family so he can focus on building a life of his own.

About the Author, Dick Hannah:

Imagine Dick Francis listing toward adventure races instead of horse racing. Or Diane Mott Davidson writing about triathlons inlieu of catering. With a background in adventure races including competing in the Army Best Ranger Competition Dick Hannah provides a fresh voice and real world glimpse into the world of adventure racing and fitness in his thriller novels.

Prior to starting his writing career he spent four years as a Ranger team leader and continues to stay sharp by working as a fitness consultant at a fitness bootcamp. When not racing or writing, Dick works full-time as technical writer, business analyst and trainer.

Dick followed up Toe the Line, his first full-length novel, in 2013 with On the Edge. He has already started on his third thriller, Vapor Trail, which he plans to release in 2014.

Learn more about Dick and his books on:
Blog
Goodreads

Purchase "On The Edge" on:
Amazon
Smashwords

Dick Hannah pens "On The Edge" in a complex plot filled with mystery, drama, thrills and a bit of romance. I found his characters to be well developed, believable and with enough twists and turns to keep my interest from beginning to end. A must read for all mystery, thriller, suspense fans.