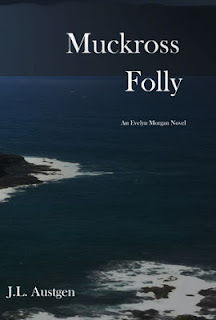 
Reeling from the destruction of her team at the hands of her deputy, FBI agent Evelyn Morgan vows revenge against her nemesis, the assassin that planned the operation, Omar Ben Iblis. The trail leads to an old friend, well-connected and well-placed in Washington's political establishment. When he refuses to help, Morgan must scramble to find the pieces to the puzzle. While investigating, she discovers a vicious new menace, more cunning and deadly than anyone she has ever faced. Trained and mentored by Ben Iblis, this new threat has already struck her family, and if Morgan doesn't act quickly, she'll be the talented protégé's next victim.


About the Author, J.L. Austgen:

J.L. Austgen is the author of the Evelyn Morgan series of mystery thrillers, including Keyser Run and Muckross Folly. He grew up in Indianapolis, Indiana, and studied creative writing at Colorado College in Colorado Springs. Partnering with his wife, Mr. Austgen founded Dreampipe Publishing in 2012. He lives in Colorado Springs with his wife and two rambunctious boys. He is hard at work on the third novel in the Evelyn Morgan series, scheduled for publication in 2014.

Learn more about the Author and his books on:
Blog
Publisher
Book Page
Facebook
Goodreads


"Muckross Folly" is the second book in the 'Evelyn Morgan' Series and the first one that I have read by this author. Filled with suspense and drama, the author pens his book in a well written plot. Between the characters that are well defined and believable, and the author's vivid descriptions, I felt I was right there. This is one book you will find yourself having a hard time putting down. I just wished I had read the first book before this one, as I'm sure I'm missing some key points. A must read for all mystery fans.

I give "Muckross Folly" a 4 star rating.