{Book Review} "Defend Yourself (no experience necessary)" by Sean Ramey 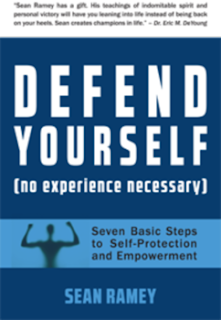 Defend Yourself (No Experience Necessary) is a breakthrough book in the self-defense genre. Unlike many systems that are too complicated for the average person, author Sean Ramey has assembled a series of seven steps which. if taken to heart. will have readers walking through life more confidently. The aim of Defend Yourself (No Experience Necessary) is to provide readers with a fundamental understanding of what to do when they are caught in a life-threatening situation. One does not need to be a super-athlete to put these steps into practice, as Ramey has geared his message for the average person who has neither the means. nor the desire, to step into a martial arts studio. Defend Yourself (No Experience Necessary) is for college students. business profes.sionals and stay-at-home parents alike. As Ramey writes, "Everyone -regardless of age, gender, size or athletic ability -should be able to walk safely through the world knowing they are armed with the tools to survive and thrive."

About the Author, Sean Ramey:

"Defend Yourself (no experience necessary)" is an easy to follow self defense book and one that every woman, and man, should have on their book shelf.  Honestly I can say that I have learned quite a bit from Sean Ramey and his books and hopefully will never have to use any of the techniques, but I do feel I'm much better prepared than ever before.

I give "Defend Yourself (no experience necessary)" a 5 star rating.