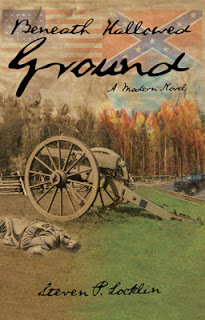 Lieutenant Jackson Prescott, having just survived the cornfield at Antietam in September of 1862, is tasked by President Lincoln to infiltrate a Confederacy group that has obtained five tons of gold for their side.

In the present, the violent death of an FBI informant thrusts Special Agent Jason Sparks into a desperate search for the very same lost gold shipment — and his failure could mean his daughter’s life.

Two men separated by one hundred and fifty years face murder and betrayal while they fight to complete their missions. Two men, linked by a vast cache of gold... and the same piece of hallowed ground.

About the Author, Steven P. Locklin: 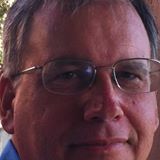 Author of "Beneath Hallowed Ground," journalist, editor and sports fan.

Steven Pens "Beneath Hallowed Ground", a historical murder mystery, in a plot that is fast paced and very well written. I was a bit confused in the beginning with the jumping back and forth between the Civil War Era and modern day, but once I got the hang of it I had a hard time putting it down and actually found the way the author did it was quite creative. His characters were well defined, memorable and I liked how the characters were woven into the storyline. I totally enjoyed the book and highly recommend it for all Civil War and historical murder mystery fans.

I give "Beneath Hallowed Ground" a 5 star rating.