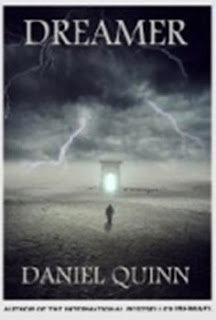 Things are looking great for Greg Donner, a Chicago freelance writer. He's got a terrific project, and he's met the woman of his dreams -- literally, his dreams (though they're rather odd ones). But then, one night, he falls asleep and awakes . . . to the beginning of a nightmare he just can't seem to wake up from. . . .

About the Author, Daniel Quinn:

I grew up in Omaha, Nebraska, and studied at St. Louis University, the University of Vienna, and Loyola University of Chicago. I worked in Chicago-area publishing for twenty years before beginning work on the book for which I'm best known, Ishmael. This book was chosen from among some 2500 international entrants to win the half-million dollar 1991 Turner Tomorrow competition for a novel offering "creative and positive solutions to global problems." The novel has subsequently sold more than a million copies in English, is available in some thirty languages, and has been used in high schools and colleges worldwide in courses as varied as philosophy, geography, ecology, archaeology, history, biology, zoology, anthropology, political science, economics, and sociology. Subsequent works include Providence, The Story of B, My Ishmael: A Sequel, Beyond Civilization, After Dachau, The Holy, and most recently At Woomeroo, a collection of short stories. I can be found on Facebook, and my Web site, ishmael.org, is enormous, offering news and announcements from readers, suggested readings, speeches and essays available nowhere else, detailed answers to more than 500 questions asked by readers over the years, and a Guestbook with thousands of entries. I and my wife, Rennie, have lived in Chicago, Santa Fe and Madrid, New Mexico, and Austin, Texas. We currently live in Houston.

Daniel Quinn pens "Dreamer" in a plot that weaves between two different worlds and is filled with mystery, romance, thrills and a touch a humor. With his well developed characters and very vivid descriptions, I was hooked from the beginning to the end. A fantastic read that is highly recommended to all horror and thriller fans.