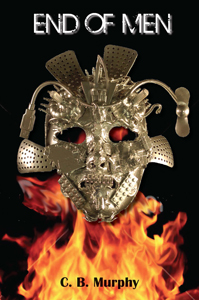 
C. B. Murphy’s End of Men is a satiric tour de force about the ambiguity of identity where art intersects relationship. Inspired by The Magus, the book takes a successful Chicago couple through life-altering experiences ending on an Italian island run by a Warholian student of Aleister Crowley and his Iranian-feminist femme fatale. Adrift in midlife angst, ﬁnancier Ben withholds the secrets of his wild past from his younger wife Kay. In horror at becoming a suburban “Beige,” Kay longs for her own walk on the wild side. As assistant curator of a feminist-themed outsider art exhibit, the End of Men, Kay contacts Ben’s estranged friends, the narcissistic Gordon and the exotic Shiraz, who run a ﬁlm school on a Mediterranean island. Their secret is that it is a struggling place where underpaid Eurotrash produce factory art while working as grips and extras on Shiraz’s underfunded masterpieces of neo-feminist surrealism. When the self-styled enfants terribles premier their ﬁlm at Kay’s museum, Ben’s past crashes through its barriers. Caught in the nether zone of grief and confusion, he accepts an invitation to “vacation” at the island described as an artists’ paradise. In Magus territory now, Ben and Kay become pawns in bizarre psychological games of erotic adventure with the promise of a renewed marriage through the reawakening of Ben’s wild heart. In this swirling circus of eccentricity, Ben’s ability to distinguish what is real quickly erodes as he and Kay become performers in Gordon and Shiraz’s ﬁnal ﬁlm, a reenactment of the immolation of Jacques de Molay, the last Knights Templar. As simmering violence threatens to become more than cinematic metaphor, Ben and Kay realize the manipulations have become dangerous.


About the Author, C.B. Murphy:

C.B. Murphy is a published novelist, cartoonist, filmmaker, painter, and mask-maker who has sold railcars of zinc, developed products in Hong Kong and is currently teaching art in a prison.Murphy’s work is supremely entertaining and decidedly inspirational. He believes that the cure for modernity is personal creativity and hopes to excite you to feel the same. Fight the Sloth of Death!

A chapter of C. B. Murphy’s debut novel, CUTE EATS CUTE (2010), was published in Ellipsis Magazine as a short story entitled Free the Deer. In 2005, a chapter from Murphy’s second novel, END OF MEN, won first prize for fiction at the Southampton Writers Workshop. Murphy’s short films have been shown at colleges, the Walker Art Center in Minneapolis, and at the Willis Gallery in Detroit.

His cartoon series (a one panel shot entitled “CB Murphy”) appeared in the alternative weekly The Chicago Reader alongside Matt Groen and Lynda Barry. Chicago’s Museum of Contemporary Art selected one of his artist books of drawings—JANUARY IS ALIEN REGISTRATION MONTH—for their permanent Artists Books collection. Murphy’s illustrations—drawings, paintings and computer-generated photo collages—have appeared in many national magazines. Murphy studied anthropology, literature, and filmmaking at the University of Michigan under the tutelage of anthropologist-writer Richard Grossinger, (author of Waiting for the Martian Express, founder of North Atlantic Press and Miranda July’s father). Murphy received his BA in geography from the University of Minnesota.


C.B. Murphy pens "End of Men" in a plot filled with twists and turns that kept me guessing through the whole book, while throwing in just a bit of humor. He takes you through a truly interesting roller coaster ride of adventure with interesting characters, and a bit of history. Although the characters were different/creative/eccentric, the author always stayed on a believable path throughout the book. A fantastic read and highly recommended for all....just be prepared, it will make you question you values.