* Disclosure of Material Connection: I am a member of IMR Reviews. Although payment may have been received by IMR Reviews, no payment was received by me in exchange for this publication. This disclosure is in accordance with the Federal Trade Commission's 16 CFR, Part 255, Guides Concerning Use of Endorsements and Testimonials in Advertising. 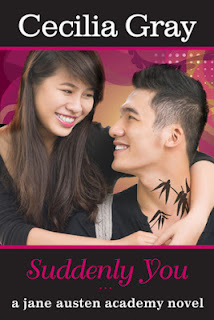 
Fanny doesn't want to be at The Jane Austen Academy. She intends to lay low until graduation when she can try out for the Olympic track team. She doesn't need friends or love. She only needs her running.

But The Academy is in danger. In an effort to save it, Fanny joins forces with the friends she never knew she wanted. Suddenly, Fanny finds herself center stage in the middle of the Academy's biggest love triangle as the lead in the school play...only this track star can't afford to break a leg.

The last thing that the girls at the elite Jane Austen Academy need is hot guys to flirt with. But over the summer the school has been sold, and like it or not, the guys are coming. And it’s about to turn the Academy—and the lives of its students—totally upside down…


1. What are your favorite foods? This includes the sweets (:

2. Can you each describe what you prefect date would be?

Oh wow, I haven't been on enough dates to know what a perfect one looks like. Maybe a private jet whisks me off to an exotic island where we spend the afternoon kite surfing. No pressure, boys. Line up as you please.

3. In your spare time; what are some things the two of you like to do?

By two of us, do you mean me and Tran? I'd tell you, but I'd have to kill you. Or at least run faster than the police could catch me. Which shouldn't be hard assuming they're on foot instead of in a car.

4. What is your FAVORITE thing about the Jane Austen Academy?

The other girls – they're like best friends and family all wrapped in one.


Cecilia Gray lives in the San Francisco Bay Area where she reads, writes and breaks for food. She also pens her biographies in the third person. Like this. As if to trick you into thinking someone else wrote it because she is important. Alas, this is not the case.

Cecilia has been praised for “instilling a warmth and weight into her characters”  (Romancing The Book Reviews) and her books have been praised for being “well-written, original, realistic and witty” (Quills & Zebras Reviews).

Her latest series of young-adult contemporary Jane Austen retellings was named a What’s Hot pick (RT Book Reviews magazine) and is a Best of 2012 pick (Kirkus Reviews) where it was praised for being a “unique twist on a classic” and offering “a compelling mix of action, drama and love.”

She’s rather enamored of being contacted by readers and hopes you’ll oblige at cecilia@ceciliagray.com .


1st prize is a $25 Gift Card to Bookstore of Winner’s Choosing.
2nd prize is 5 copies of ANY Jane Austen Academy Book (winner can choose which they want)