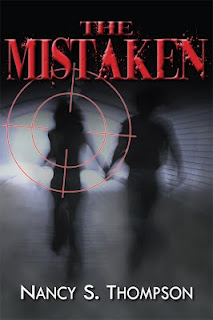 
Tyler Karras is an honest man, a transplanted Brit living the American dream, but his charmed life takes an unexpected turn when his brother, Nick, is coerced into joining ranks with San Francisco’s Russian mafia.  Ty intervenes to secure Nick’s freedom, yet only succeeds in incurring their wrath.  With no choice but to accept Nick’s new life, Ty returns to his own, but his dreams are dashed when his wife—pregnant with their first child—is killed, the victim of a reckless crime.

Despondent and bitter, Ty macerates his grief in alcohol.  From the depths of the bottle screams a voice, howling for vengeance.  His target is a stranger, the woman who drew his wife toward her death.  He doesn’t know her, but he’ll find her, and when he does, he will make her pay, for a deal has been struck with Nick’s Russian associates, enslaving her into a life of bondage.  But as Ty moves forward in a cloud of alcohol, he mistakes the wrong woman for his intended victim and now all his plans have gone straight to hell.

With his eyes made clear by the stark reality of his mistake, Ty is driven, compelled by remorse and a relentless sense of guilt to make amends and protect Hannah Maguire, the innocent woman whose life he has derailed.  He vows to keep her safe and out of the Russians’ hands, but they’re holding Nick as leverage to force Ty to complete their deal and turn over the girl.  Once again, he must fight to free his brother, miring all three lives in further jeopardy.  But Ty can’t do it all:  Save the girl, his brother and his own soul.  One of them must make the ultimate sacrifice.

About the Author, Nancy S. Thompson:

“The hell of revenge—the hope of redemption”

Nancy started writing fiction rather suddenly one day in 2010.  Inspired by a song, she was struck with an idea she couldn’t shake and just had to write it down.  It was while working on this, her first novel, that she discovered just how much she loved writing.  She only wishes she had known how much years earlier.  Nancy makes her fiction debut with The Mistaken. She is an interior designer and California transplant, currently living with her husband near Seattle, WA.

"The Mistaken" is a fantastic thriller/romance/suspense/mystery novel that will keep you reading until your finished. A fast paced plot with tons of twists, turns, and characters that are well developed and realistic...it's just WOW!  Total excitement from start to finish.  Highly recommended for all suspense, mystery fans.

I give "The Mistaken" a 5 star rating.