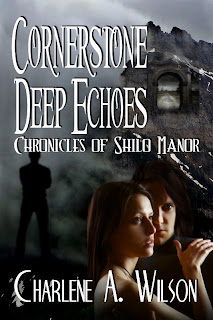 Charlene is an author of paranormal suspenseful tales that sweep you away to other dimensions. She weaves magic, lasting love, and intrigue into multi-layered story lines to immerse you into the lives of her characters.

She began writing in her early teens when her vivid dreams stayed with her long after she had them. The characters and worlds were so amazing, she brought them to life through her books. You can meet them now in her series, Chronicles of Shilo Manor, and soon in her series, Aumelan.

She resides in a small community in Arkansas, USA, with her two beautiful daughters, a gray cat, Chester, and a fluffy black dog, KooJo.


A touching and magickal romance story, "Cornerstone Deep Echoes" picks right up where 'Cornerstone Dee' left off.  Charlene pens her characters well written and brings them to life in this fast paced, totally hard to put down sequel. Recommended for all romance and paranormal romance fans.

I give "Cornerstone Deep Echoes" a 5 star rating.