"No One To Hear You Scream" by K.J. Dahlen {Book Review} 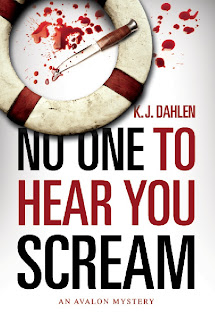 After the death of his wife New Orleans police officer Sam Sebastian starts trailing the man responsible for her murder. He leaves his son with his grandmother and goes in search of the killer. FBI agent Cole Davidson is also on the trail of this killer and he wants Sam to back off, but Sam can’t back off. He wants justice for Chloe’s death.
Cole catches up with Sam in Baton Rouge after another woman, Sable Willows goes missing. She is the same type as the other victims and Sam tells the police that unless they find her soon all they will find is a body.
Cole lends new information to the case. He’s been after this killer for seven years. He has reason to believe the killer is traveling by boat up and down the Mississippi River. He also thinks the reason Sam’s wife was murdered was because Sam was getting too close to the killer and the killer wanted to stop him from catching him.
Sable manages to escape from her abductor but is injured in the process. She goes straight to the police. The police put her in the hospital but after a late night visit from the killer Sable escapes the hospital. He tells Sable during his visit that he can get to her anytime and anyplace.
The next morning two separate incidences suggest to Sam that Cole is not who he says he is. Two different people claim to know Cole as someone else, one is a waitress, the other is a business man who claims he has dealt with Cole as another man. Sam thinks Cole is hiding his true motive and the evidence points directly at Cole being the very killer they are looking for.
Cole must defend himself by revealing the fact that the killer is his cousin Tanner Briggs. Now Sam questions Cole’s reasons for investigating the case and knows that Cole is hiding yet more information on his cousin.
Sable is found but before they can get any information from her the killer strikes again, this time not only murdering Sable but also the police officer in charge of her safety.
Sam receives a letter from the killer with a hidden message inside. When he rushes to Sable’s bedside he interrupts the killer and ends up with the killer’s trademark left on his chest. This killer’s signature is to carve a drawing on his victims’ backs and until now, no one has been able to understand what the killer is trying to say. Cole offers an explanation.
Sam’s suspicions are raised again. Cole seems to only give them enough information at one time to satisfy their present needs. He thinks Cole knows more than he’s telling.
Then Sam gets bad news from home, someone has taken his six year old son and Sam knows Tanner Briggs has taken his son, in yet another attempt to get him off this case. Sam and Cole decide to travel the river to see if they can catch up with Tanner.
Cole thinks he knows where Tanner will go. His grandfather owned a farm on the bank of the river near a town called Hannibal, Missouri. The element of surprise is on their side and they almost catch up with him twice but Tanner switches boats and makes it to the farm before they can get there.
When Sam and Cole get to the farm Sam gets Tanner in the sites of his gun but Cole allows his cousin to escape. Something Tanner tells him has Cole fearing for his families lives. They make a mad dash for Cole’s family in St. Louis only to find them safe. The same can’t be said for Tanner’s parents and younger brothers. They are missing and Cole and Sam find signs of a struggle at their house.
Sam and Cole go back to the farm and on the way Cole is taken hostage by Tanner. Now Sam must find a way to free Cole and get his son back before Tanner kills them both.
In a faceoff it isn’t Sam or Cole that shots Tanner but his own father. When the local police get there they make a shocking discovery. Tanner’s body is gone! Sam finds evidence that Tanner was wearing a bullet proof vest and it’s up to Sam and Cole to track him down once and for all.
In the end it’s Sam that finds him and Sam isn’t left with a choice. Tanner choses to die rather than go to jail. Sam is glad that Tanner’s reign of terror is over and all he wants to do is take his son home.

I  live in a small town (population 495) in Wisconsin. From my deck I can see the Mississippi River on one side and the bluffs, where eagles live and nest on the other side. I live with my husband Dave and dog Sammy. My two children are grown and I have two grandchildren. I love to watch people and that has helped me with my writing. I often use people I watch as characters in my books and I always try to give my characters some of my own values and habits.

My book titles are: Bones, The Darkness Within, Meghan’s Legacy,  Shadow Chaser, Witness, Secrets and Lies, Legacy of Murder, The Unknown Son, The Prophet, No One to Hear You Scream, Bradbury Inn, Murderous Intent, Wrong Number, Fall from Grace, The House on Berkley Street.

My next books coming out are, Cards Of Sin, Blood Memories, Phoenix Rising.  A Murder in her Past has been accepted but not started going through the editing process yet.
Cards of Sin will be out August 10th and Blood Memories will be released   sometime in August. I’m waiting on the test copy now.

I’m not sure when Phoenix Rising will be out. It was supposed to come out in Sept. Xchyler recently got a new Editor and everything has to go through her

Purchase "No One To Hear You Scream" on:
Amazon
Barnes & Noble

K.J. pens "No One To Hear You Scream a suspenseful crime thriller with characters are believable and understandable. I found the plot to be fast paced and action packed with crime, mystery, thrills, suspense and so much more.  A real page turner that hooked me from the beginning to an ending that was fantastic. Recommended to all suspense fans.

I give "No One To Hear You Scream" a 5 star rating. 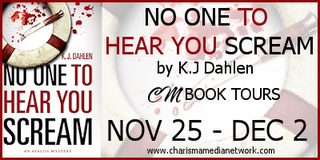