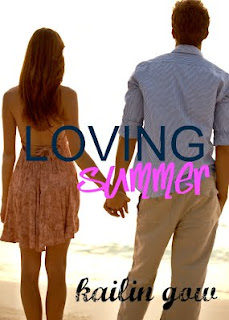 
After not having seen childhood family friends, Rachel and her brothers Nathaniel and Drew in three years, sixteen year old Summer Jones, who has always spent her summers with the Donovans at her Aunt Sookie's Malibu beach house, discovers there is more to her long-time crush on one of the Donovan brothers this summer than meets the eye, especially when Astor Fairway, the handsome television star taking her aunt's acting coaching sessions, notices her.  This summer, the summer she is noticed, would be the summer no one could forget.

Kailin Gow began writing books for tween girls to help them with self-confidence and self-esteem. Her book, Gifted Girls Activities Guide to 365 Days of the Week, became a reference book used in girls organizations across the U.S. As her tween fans grew to become teens and young adults, Kailin began writing engaging and entertaining young adult book series for them. The results are book series like the Frost Series, PULSE Series, Wicked Woods Series, Stoker Sisters, Phantom Diaries, The Fire Wars, FADE, DESIRE, and more.

Kailin does it again with "Loving Summer" a YA contemporary romance with well developed characters that are easy to identify with.  A fast, fun read, Kailin pens the plot so smoothly that you will find it hard to put the book down. Highly recommended for all readers 16 and older.

I give "Loving Summer" a 5 star rating.