Welcome to My Cozie Corner's stop on the
"A Bridge to Treachery" book tour.
This tour is brought to you by Innovative Book Tours. 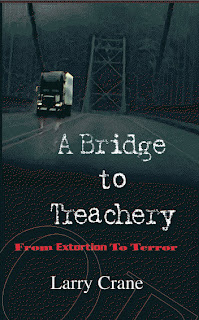 Former Colonel Lou Christopher is an ex-Army Ranger retired from the military and contentedly working as a New York investment broker. After being assigned a number of lucrative accounts and becoming accustomed to living the good life, he discovers there is a pay back. His former military skills are requested under a threat of losing everything he has.

Handed a group of misfits to assemble into a military strike team, he is coerced into leading the team on a mission of domestic terrorism. At the center of a bridge outside of Manhattan, his strike team is caught in the act and unexpectedly becomes engaged in a deadly firefight. It's then that he learns the mission was a political maneuver from the highest levels of the U.S. Government-and ultimately realizes he has been betrayed by his superiors. Learning his team was considered nothing more than collateral damage and intended to be killed and left as scapegoats, he uses his unique military expertise and engages in a fight for his life.

As the strike team is decimated, he and a female teammate elude the opposition forces to survive and escape, turning the tables on his superiors. Using his distinctive set of military skills, he now becomes the hunter and vows to extract his revenge and bring them all down.

About the Author, Larry Crane:

Transplanted to Maine mid-westerner Larry Crane brings an Illinois sensibility to his writing. Larry graduated from West Point and served in the Army before starting  a business career on Wall Street. His writing includes articles for outdoor magazines, plays, short fiction, and his most recent thriller novel, A Bridge to Treachery. In his spare time, Crane is a hobbyist videographer for his local Public Access Television Station and is a volunteer at his local historical society. Larry and wife Jan live in splendid isolation on the coast of Maine.

Purchase "A Bridge to Treachery" on:
Amazon
Barnes & Noble
Smashwords

Larry pens "A Bridge to Treachery" a good paced, action thriller with highly developed characters in a well written plot that didn't kicked in until around a quarter of the way into the book....but keep reading it will hook you right in.  Recommended for all action packed thriller fans.

I give "A Bridge to Treachery" a 4 star rating.