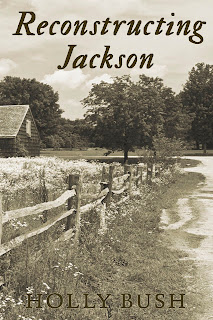 1867 . . . Southern lawyer and Civil War veteran, Reed Jackson, returns to his family’s plantation in a wheelchair. His father deems him unfit, and deeds the Jackson holdings, including his intended bride, to a younger brother. Angry and bitter, Reed moves west to Fenton, Missouri, home to a cousin with a successful business, intending to start over.

Belle Richards, a dirt poor farm girl aching to learn how to read, cleans, cooks and holds together her family’s meager property. A violent brother and a drunken father plot to marry her off, and gain a new horse in the bargain. But Belle’s got other plans, and risks her life to reach them.

Reed is captivated by Belle from their first meeting, but wheelchair bound, is unable to protect her from violence. Bleak times will challenge Reed and Belle's courage and dreams as they forge a new beginning from the ashes of war and ignorance.

About the Author, Holly Bush:

Holly Bush was born in western Pennsylvania to two avid readers. There was not a room in her home that did not hold a full bookcase. She worked in the hospitality industry, owning a restaurant for twenty years, and recently worked as the sales and marketing director in the hospitality/tourism industry, credited with building traffic to capacity for a local farm tour, bringing guests from twenty-two states, booked two years out. Holly has been a marketing consultant to start-up businesses and has done public speaking on the subject.

Holly has been writing all of her life and is a voracious reader of a wide variety of fiction and non-fiction, particularly political and historical works. She has written four romance novels, all set in the U.S. West in the mid 1800’s. She frequently attends writing conferences, and has always been a member of a writer’s group.

Holly is a gardener, a news junkie, and vice-president of her local library board and loves to spend time near the ocean. She is the proud mother of two daughters and the wife of a man more than a few years her junior.

Holly pens "Reconstructing Jackson", a  Civil War novel, filled with history, romance and emotion. Her characters are believable and realistic in a plot that was so interesting that it kept my attention from start to finish.  Another great novel from Holly!  I highly recommend this book to all historical romance fans.


I give "Reconstructing Jackson" a 5 star rating.


5x "Reconstructing Jackson" ebooks. Open to those 18 and older. To enter, simply complete the Rafflecopter below.

Disclosure: I received the above product(s) from the company in exchange for an honest review. I received no compensation for this publication. My opinions are my own and may differ from those of your own. My Cozie Corner is not responsible for sponsor prize shipment. This review is brought to you by Charisma Media. This disclosure is in accordance with the Federal Trade Commission’s 16 CFR, Part 255, Guides Concerning the Use of Endorsements and Testimonials in Advertising.