Welcome to My Cozie Corner's stop on the
"Dominion" book tour.
This tour is brought to you by Innovative Book Tours. 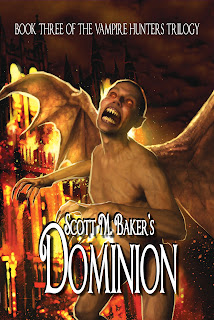 After being hidden away for centuries, the Vampyrnomicon, the Book of the Undead, is finally unearthed, and with it the terrible secret of the vampires’ origins.  The discovery of the Vampyrnomicon gives Drake Matthews the means to defeat the Master and eradicate the vampire threat, but it also provides Chiang Shih with the knowledge she needs to make her masters immortal.

Now more powerful than ever, Chiang Shih raises an army of the undead and creates a vampire nation in Washington D.C.  Her attempt to assassinate Drake and his colleagues nearly cripples the hunters, but fails to kill them all.  Driven by vengeance, and with his band of hunters swelled by unlikely allies, Drake leads the group into the infested city.

With the fate of humankind hanging in the balance, hunters and vampires wage the final epic battle in the streets of the nation’s capital to determine who will hold dominion over the earth.

Born and raised in Everett, Massachusetts (just outside of Boston), Scott M. Baker has spent the last twenty-two years living in northern Virginia.  He has authored several short stories, including “Dead Water”, “Rednecks Shouldn’t Play with Dead Things”, “Cruise of the Living Dead”, “Deck the Malls with Bowels of Holly” (an alcoholic mall Santa battles zombie reindeer), and “Denizens.”  His two latest short stories – “The Last Flight of The Bismarck,” about steampunk zombies, and “The Hunger,” a tale of cannibalism during a zombie outbreak – will both be released later this year in anthologies being published by Knighwatch Press.

Scott’s first zombie novel, Rotter World, which details the struggle between humans and vampires during a zombie apocalypse, was released by Permuted Press in April 2012.  He has also authored The Vampire Hunters trilogy, which has been published by Pill Hill Press and received excellent reviews from Famous Monsters of Filmland and Fangoria, among others. Scott has finished his fifth novel, Yeitso, a homage to the monster movies of the 1950s set in northern New Mexico, which is currently with a publisher, and is wrapping up his sixth novel, Hell Gates, the first in a series of young adult novels set in a world in which the realms of Hell and earth have merged.

"Dominion" is the 3rd and final book of the 'Vampire Hunter Trilogy' and in my opinion the best one out of them all. As usual Scott pens his characters believable and realistic in a great plot that ties up all the loose ends . This book kept me on the edge of my seat until the end. Highly recommended for all vampire lovers!

I give "Dominion" a 5 star rating.