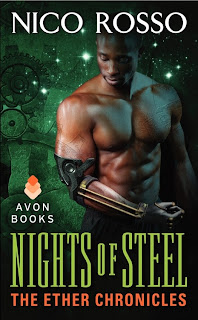 Nico Rosso turns up the temperature in his sexy, steampunk romance.

Enter the world of The Ether Chronicles with Nico Rosso’s latest sexy steampunk offering, Nights of Steel (Avon Impulse; on-sale 11/6/2012; e-ISBN 9780062201102; $1.99). “Wild” West takes on a whole new meaning in Rosso’s version of America: airships roam the skies, and genetically engineered Man O’ Wars wreak havoc—and that’s nothing compared to the rising tension between bounty hunters Anna Blue and Jack Hawkins. This book is all about action—of every kind—and between the cool-as-heck characters, the surreal steampunk landscape, and the electrifying chemistry between the two protagonists, Nights of Steel is a must-read for fans of romance with an action edge!

Bounty hunter Anna Blue always finds her fugitive. But her latest mission is filled with mystery-a high price for an eccentric inventor. And her biggest rival, Jack Hawkins-a startlingly handsome, entirely unsettling man whose abilities match her own– is hunting the same bounty. Neither will back down.

When a rogue Man O’ War flies his airship into the California skies, guns blazing, Anna and Jack are forced to team up or die. But it isn’t the danger that has them ready to flare like gunpowder. They’ve circled each other for years as competitors only. Fighters and outsiders, they never thought they’d find a kindred soul. But as hot passion, and raw need draw them together, can they survive this mission long enough to track the most elusive fugitives…their hearts?


About the Author, Nico Rosso: 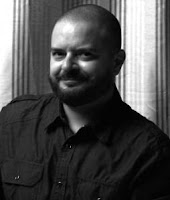 Nico Rosso was a writer in search of a genre until his wife, Zoe Archer, brought romance into his life in more ways than one. Through her he learned the romance genre was filled with vast opportunities for storytelling. He created the sci-fi romance Limit War series, sweeping readers off Earth to an interstellar conflict. Closer to home, he set off the apocalypse with The Last Night. And starting with the Ether Chronicles, he gets to write closer than ever with his wife. They created the steampunk world together and trade off, telling the romance tales that span the globe.

Purchase "Nights of Steel" on:
Amazon
Barnes & Noble
All Romance

Nico pens "Nights of Steel" with interesting characters in a plot filled with action, romance, and steamy sex. I found the plot to flow smoothly without a hitch and recommend it to all action, romance fans.

I give "Nights of Steel" a 4 star rating.


ONE winner - 3 books leading up to this one in the Ether Chronicles series by Nico Rosso and Zoe Archer (Night of Fire, Skies of Steel, and Skies of Fire) US ONLY. To enter, simply complete the Rafflecopter below. 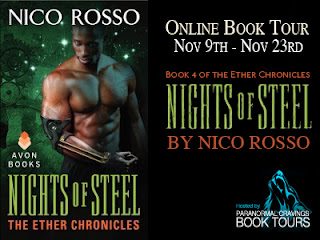 * Disclosure of Material Connection: I am a member of Paranormal Cravings Book Tours and a copy of this book was provided to me by the author. Although payment may have been received by Paranormal Cravings Book Tours, no payment was received by me in exchange for this review. There was no obligation to write a positive review. All opinions expressed are entirely my own and may not necessarily agree with those of the author, publisher, publicist, or readers of this review. My Cozie Corner is not responsible for sponsor prize shipment. This disclosure is in accordance with the Federal Trade Commission's 16 CFR, Part 255, Guides Concerning Use of Endorsements and Testimonials in Advertising.