Welcome to My Cozie Corner's stop on the
"Survivor Roundup" promo book tour.
This tour is brought to you by Innovative Book Tours. 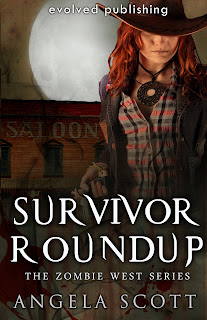 Red always knew she would have to face the man who nearly destroyed her. She just didn’t figure it would happen so soon . . .

With the plague sweeping across the nation, destroying many and turning others into walking corpses, survivors head West in search of a chosen land, a place designed to keep the infected out, while sealing survivors inside. In theory, the idea seems the only way to keep humanity alive. In practice, it doesn’t matter whether a person is on the inside or the out—there is no humanity.

. . . And even though John Gatherum hunted her down and instigated their reunion, Red’s no longer the passive girl he once manipulated. This time, she has a hidden agenda of her own.

Kill him. Save her family. Save herself.

Angela Scott hears voices. Tiny fictional people sit on her shoulders and whisper their stories in her ear. Instead of medicating herself, she decided to pick up a pen, write down everything those voices tell me, and turn it into a book. She's not crazy. She's an author. For the most part, she writes contemporary Young Adult novels. However, through a writing exercise that spiraled out of control, she found herself writing about zombies terrorizing the Wild Wild West--and loving it. Her zombies don't sparkle, and they definitely don't cuddle. At least, she wouldn't suggest it. She lives on the benches of the beautiful Wasatch Mountains with two lovely children, one teenager, and a very patient husband. She graduated from Utah State University with a B.A. degree in English, not because of her love for the written word, but because it was the only major that didn't require math. She can't spell, and grammar is her arch nemesis. But they gave her the degree, and there are no take backs.