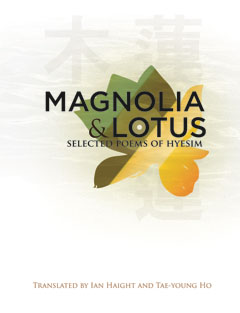 
Enlightenment as a process: what might it have been like for a Korean Buddhist monk who lived hundreds of years ago?

If enlightenment is an unfolding of wisdom, what progressive awareness is suggested by that unfolding?

Imagine, then, this same monk becoming the leader of the nation's most important Buddhist Order: the Chogye. Magnolia and Lotus: Selected Poems of Hyesim suggests what Hyeim might have valued in life; as a monk; and as an early founder of Korea's largest Buddhist sect.

Despite his achievements, this collection asks, did Hyesim eventually relinquish his position? If so, why? What were Hyesim's thoughts in his final years?

Each of the translated poems, attentive to the nuances of Hyesim's Buddhist and Confucian background as well as the landscape of Korea, posits the point of view of Hyesim, his voice, and his time.


I like this poem for a number of reasons, and, at the translator’s ever-present risk of presumption, believe it captures the voice of Hyesim.  There resides so much Buddhism in these 4 simple lines: the non-judgmental doubting of what is observed, and how shifting perspective reveals different possibilities in assumptions; the idea of the blossoms themselves—both lotus flowers and magnolias as representations of wisdom, beauty, truth, and enlightenment; the appreciative acceptance of not knowing what a flower is because its fixed form cannot be determined, and how this understanding could be applied to everything comprehended by the mind; finally, a penetrating recognition: that there is nothing to compare with the singularity of what is observed—everything under the sun has uniqueness.  A train of thought that is simultaneously paradoxical and circular couched in deceptive simplicity—yes, this poem feels very Buddhist.  The poems in this collection present a world observed with reverence and admiration by a monk who lived more than 700 years ago.  It feels natural to identify the collection as a unified voice of Hyesim.

Why title the book Magnolia and Lotus?  The answer lies in the poem, “Magnolia, the Lotus of Trees.”  Consider a poem as an image of perspective; or the idea that language-a poem-a translation is a shifting continuum, both having and lacking permanence.  And yet, somewhere among these possibilities is a node that remains distinctive, if even for a moment—something we can give a title to, calling it a poem or perhaps even a book.  Under this Buddhist way of thinking, naming the book after the poem, “Magnolia, the Lotus of Trees,” feels appropriate.

The poems in this book are built around an imagined life of Hyesim and his purpose for writing poems.  What did Hyesim experience in meditation?  How did his wisdom grow with progressive enlightenment?  What did he place importance on in life; as a monk; as an early founder of Korea’s largest Buddhist sect, the Chogye Order?  If he eventually relinquished this position, what did he then do? What were his thoughts in his final years?  Each of the translated poems, attentive to the nuances of Hyesim’s Buddhist and Confucian background as well as the landscape of Korea, posits the point of view of Hyesim, his voice, and his time.  My hope is that this collection—utilizing metaphor, rhythmic language and imagery—invites a reader into relaxed companionship with Hyesim and his life. 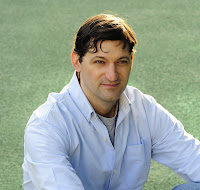 Ian Haight was a co-organizer and translator for the UN's global poetry readings held annually in Pusan, Korea, from 2002-4. He has been awarded 5 translation grants from the Daesan Foundation, Korea Literature Translation Institute, and Baroboin Buddhist Foundation for the translation, editing, promotion, and publication of Korean literature. Ian is the editor of Zen Questions and Answers from Korea (2010), and along with T'ae-yŏng Hŏ, the translator ofBorderland Roads: Selected Poems of Kyun Hŏ (2009) both from White Pine Press. Ian's translations, essays, poems, and interviews have appeared in Prairie Schooner, Writer's Chronicle, Barrow Street and Hyundae Buddhist News, among many other publications.

Ian Haight's translation of "Magnolia and Lotus" was complete and meaningful. Each poem is written beautifully and I found myself sitting there reading and connecting with almost all the poems offered. I'm sure there are some that would say the opposite of myself, but in all reality poems are what each individual comes away with...some will find great meaning, some will only understand parts and others will come away with nothing. I enjoyed reading the poems and recommend them to everyone.

I give "Magnolia and Lotus" a 4 star rating.

2 winners - Paperback copy of "Magnolia and Lotus" (open to US)