* Disclosure of Material Connection: I am a member of Premier Virtual Author Book Tours and a copy of this book was provided to me by the author. Although payment may have been received by Premier Virtual Author Book Tours, no payment was received by me in exchange for this review. There was no obligation to write a positive review. All opinions expressed are entirely my own and may not necessarily agree with those of the author, publisher, publicist, or readers of this review. This disclosure is in accordance with the Federal Trade Commission's 16 CFR, Part 255, Guides Concerning Use of Endorsements and Testimonials in Advertising. 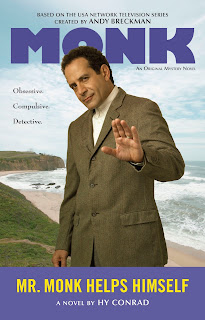 
Mr. Monk Helps Himself is an all-new mystery, written by Hy Conrad, the Edgar Award-nominated screenwriter and co-executive producer of Monkand starring the characters from the wildly successful television series.

Now that Monk and Natalie are both in San Francisco again, life is almost back to normal, with one exception:  Natalie is studying for her PI license, the last step to becoming Monk's full partner.

Before taking the plunge, Natalie sneaks off to Half Moon Bay for a retreat run by Miranda Bigley, charismatic leader of the "Best Possible Me" self-help program, whose philosophy has helped Natalie deal with her recent life changes.  Her plans for a relaxing weekend are disrupted when Monk tracks her down, determined to rescue her from the "cult."  Their argument is cut short when Miranda, in full view of everyone, calmly walks to the edge of a cliff and jumps off.

Even though Miranda's death looks like suicide-especially when it's discovered that she was on the brink of financial disaster-Natalie is sure it is murder.  But Monk brushes her off to help the SFPD solve the murder of a clown, despite his fear of clowns-number ninety-nine on his list of one hundred phobias.

Natalie and Monk begin their separate investigations and are quickly caught up in situations neither one of them can handle.  If they want to solve both crimes - and survive - they first need to learn how to be full partners.  Can Monk handle the change?


About the Author, Hy Conrad: 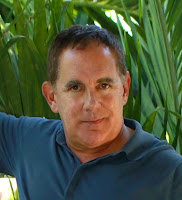 Hy Conrad was one of the original writers on the USA Network television series Monk and stayed with the series for all eight seasons, acting as co-executive producer for the last two seasons and garnering three Edgar® Award nominations. In addition, Hy was head writer of the webisode series Little Monk and served as consulting producer and writer on the USA series White Collar.

He is the author of hundreds of short stories, dozens of interactive mysteries, and ten books of solvable whodunits, sold around the world in fourteen languages. His first mystery novel series, Abel Adventures, premiered in 2012, with the publication of Rally 'Round the Corpse.  On a more humorous note, Hy is also the author of Things Your Dog Doesn't Want You to Know.


Hy Conrad's writing in "Mr. Monk Helps Himself" is refreshing as he keeps Monk alive.  Mr. Conrad's portrayal of Monk in his books is a bit more phobic than he was in the series, personally I like this Monk much better than the annoyingly obsessed Monk. I found the plot to be clean and exciting, but with a bit to much of Natalie and not enough of Monk himself. Needless to say I totally enjoyed the book and highly recommend it to all Monk fans. If you loved the series Monk, then you will need to read Hy's books on Mr. Monk!

I give "Mr. Monk Helps Himself" a 5 star rating.