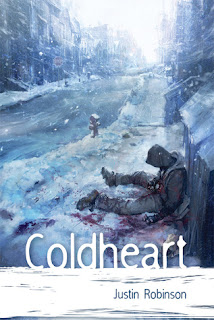 San Francisco is on the edge of a blizzard, the first in a hundred years. A cannibal killer stalks the streets. A rash of abductions targets people seemingly at random. A city falling into chaos.

Chris Black sees the connection. On the trail of a missing woman, he uncovers the delicate threads uniting the disparate mysteries. But he is mentally ill and all of it could be the product of his diseased mind. Balancing the fog of medication with his descent into madness, he struggles to remain lucid in the face of horror.

Delving into a mystery that might be of his own making, he discovers a secret world. A world where women become serpents, the very ground can be his deadliest enemy, a world of the blackest magic. He has found the edges of something older than he can imagine, something that can change the fabric of reality.

And the storm itself is his only ally.

The novella Coldheart opens the collection, which is rounded out with five short stories. In “Dante Ascending,” a boy discovers the dangerous secret at the top of an inner city tenement; “Wait” is the story of two soldiers on opposite sides becoming unlikely friends; in “The Menagerie,” a young couple finds an extradimensional zoo; “Dead Drop” chronicles the rise and fall of a spy; and finally, in “Stillwater,” a town is accidentally sent to hell. Coldheart is the first book in the League of Magi series by Justin Robinson.


About the Author, Justin Robinson:

Much like film noir, Justin Robinson was born and raised in Los Angeles. He splits his time between editing comic books, writing prose and wondering what that disgusting smell is. Degrees in Anthropology and History prepared him for unemployment, but an obsession with horror fiction and a laundry list of phobias provided a more attractive option.


Justin Robinson pens "Coldheart" a fantastic collection of stories of magick. Each story contains ordinary people, the world of immortals and magick, then builds to where each will somewhat interconnect in meaning while leaving everything open for a future collection. I was totally captivated in this collection and hope the author continues on with it. Highly recommended for all fantasy and magick fans.

I give "Coldheart" a 5 star rating.