* Disclosure of Material Connection: I am a member of Sage's Blog Tours. Although payment may have been received by Sage's Blog Tours, no payment was received by me in exchange for this publication. This disclosure is in accordance with the Federal Trade Commission's 16 CFR, Part 255, Guides Concerning Use of Endorsements and Testimonials in Advertising. 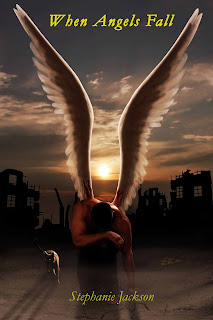 
Danielle Coulter had never believed in anything except her mother, hard work and heartache. She never had time for religious fairy tales. But when her mother died, Dani was forced to believe…or die. Not only was she forced to accept that God and Lucifer are real, but also that she is the last living descent of God on Earth. An undeniable fact when the Archangel Gabriel fell to Earth to protect her.

Archangel Gabriel; banished from Heaven over four million years ago for refusing to kill his brother, Lucifer, was about to get a second chance to re-enter Heaven. He was sent to Earth on a mission from his Father to protect the last Daughter of God; the last woman to carry the Blood of God on Earth, and kill his brother, once and for all. Gabriel had never expected to feel anything for Dani, but he soon found himself willing to fight Heaven and Hell to keep her safe, even if it meant his own destruction.