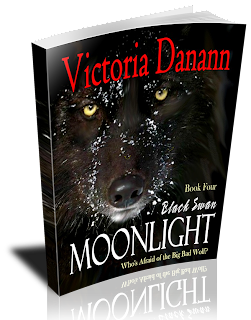 The fourth installment in The Order of the Black Swan serial saga. The story of B Team continues while the romance centers on Stalkson Grey, head of the Elk Mountain Reservation Tribe of werewolves. He embarks on an adventure he would never have dreamed possible, willing to take any risk to save his pack from extinction. Along the way he learns that true love can find you in the strangest places, even when you're far, far from home.