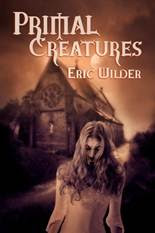 
Though only forty miles south of New Orleans, Goose Island may as well be in another world. Five feet out of the shallow waters of south Louisiana's wetlands, the secluded island is home of the Tracists Monastery. It's also a resort frequented by actors, screenwriters, and powerful people in the burgeoning Louisiana film industry. When a heinous death occurs on the island, a movie producer hires Wyatt Thomas, the French Quarter's favorite sleuth, to find out whom or what killed the victim. Was it wild dogs or a rougarou (Cajun werewolf) as the local voodoo woman tells Wyatt? His own life threatened, he must first survive the killer (or maybe killers), and the deadly hurricane taking direct aim at the monastery. Primal Creatures is the third novel in the Wyatt Thomas French Quarter Mystery Series that includes Big Easy, and City of Spirits.


About the Author, Eric Wilder:

Eric Wilder grew up in Louisiana spending many sweltering evenings listening to ghost stories and tales of voodoo. Though just a boy when he heard it, he never forgot his grandmother’s story about rougarous haunting south Louisiana swamps. He now lives in Oklahoma, about a mile from historic Route 66, with wife Marilyn.

Eric pens "Primal Creatures" in a plot filled with werewolves, voodoo and well...supernatural creatures. I loved the variety of characters as they were fun and interesting to read. A fun, quick read that will keep you turning the pages right to the end. A must read for all supernatural and mystery fans.

I give "Primal Creatures" a 5 star rating.