"Mistrial: An Inside Look at How the Criminal Justice System Works…and Sometimes Doesn’t" by Mark Geragos & Pat Harris {Book Spotlight} 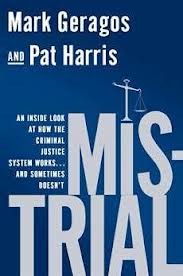 Mistrial is a searing manifesto on the ills of the criminal justice system from two of America’s most prominent defense attorneys: Mark Geragos and Pat Harris.

Mistrial features a cast of celebrity clients such as Michael Jackson, Scott Peterson, Winona Ryder and Chris Brown, as well as priests, arms dealers, corrupt politicians, crooked prosecutors, biased judges and a 24/7 media run amok. It is a veritable tour de force of legal scandal as well as a dramatic warning about a dysfunctional justice system.

Geragos has regularly appeared as both guest and legal commentator on the “Today Show,” “Good Morning America,” “Dateline NBC,” “Larry King Live,” “Greta Van Susteren’s On the Record,” “60 minutes,” and “48 hours,” and has lectured extensively and authored numerous articles and Law Review publications on the subject of Media and the Law.

Mark Geragos attended Haverford College in Pennsylvania as an undergraduate, and later earned his Juris Doctorate from Loyola Law School. He was born in Los Angeles.

Over the course of his thirteen years practicing law at Geragos & Geragos, Mr. Harris has served as co-counsel with Mark Geragos on numerous other high-profile matters, including the cases of Susan McDougal, Scott Peterson, Michael Jackson, and Barry Bonds’ trainer, Greg Anderson.

Working on the Susan McDougal case led Mr. Harris to write a book entitled Susan McDougal: The Woman Who Wouldn’t Talk. The book spent four weeks on the New York Times bestseller list, and was praised by the New York Times book review as being “moving and compelling, composed… with dignity and compassion.” Former President Bill Clinton wrote, “Every American who loves our Constitution… should read this book.”

Mr. Harris was born in Clarksville, Arkansas. He earned his Bachelor of Arts degree from the University of Arkansas in Fayetteville, Arkansas, where he graduated Phi Beta Kappa and was a state finalist for a Rhodes Scholarship.