Guest Post by J.T. Bock, Author of "A Surefire Way"

Romeo and Juliet died because of it. Jack and Rose overcame it before the Titanic sank. Elizabeth Bennett and Darcy nearly lost out on love because of theirs. In fact, every romance has at least one, and the great romances have several.

So, what is this common thread compelling romance audiences to keep reading and watching?

Those pesky barriers keep lovers from living happily ever after in the beginning of the story.

During the Washington Romance Writers Retreat in April, I attended the workshop Why don’t they get together on page 3? Barriers to union and your WIP.  This workshop was taught by Kathleen Gilles Seidel (author of 14 contemporary novels, including two RITA® winners), and Pamela Regis (Professor of English, Director of the Nora Roberts Center for American Romance, and Director of the online Romance Writing Program at McDaniel College). Two women who know what it means to write a great romance!

Regis defines the barrier in her book, A Natural History of the Romance Novel:

A series of scenes often scattered throughout the novel establishes for the reader the reasons that this heroine and hero cannot marry. Components of every barrier are either exterior (outside the heroine and hero), interior (part of their values, beliefs, or psychologies), or both.

However, the barrier needs to be something that we believe poses a real threat. For a true happily ever after (HEA), we also need to believe that it can be surmounted and the reasons for the characters overcoming the barrier have to be realistic and true to their personalities and motivations, or the story will fail for the reader.
·      In Romeo and Juliet, the feud between the families is a viable external barrier. Unfortunately, when they try to overcome the barrier, they both die.

·      In Titanic, there are several external barriers for Jack and Rose such as they are from different classes, she is engaged, and the ship is sinking.

·      In Pride and Prejudice, the internal barriers for Elizabeth and Darcy are in the title.

Can you think of other barriers in these stories either internal or external?

In my debut paranormal romance, A Surefire Way, the most obvious barrier between my hero and heroine—Surefire and Raven—is that she’s a law enforcement agent and he’s a thief that she’s sent to capture. As the story progresses and she learns he’s working on her side, the barrier starts to crack; however, there are other barriers behind that one like a controlling Aztec goddess and a maniacal magician trying to destroy them and the world. Because it is a romance, my readers know my story will end happily (no spoiler here), but the journey is all about them overcoming these barriers and “the how” keeps the reader turning the page.

In your favorite romance stories, what barriers were stopping them from living their HEA?

About the Author, J.T. Bock:

When J.T. Bock was a child, she wanted to be James Bond or Indiana Jones or a vampire hunter or Wonder Woman. Whatever brought her the most action, adventure and romance while play acting on her stage—otherwise known as her grandmother’s basement. Now J.T. has assembled her own team of action heroes, supernatural creatures and maniacal villains and set them on adventures far from her basement to exotic lands and alternate dimensions.

From a secret location outside of Washington, DC, J.T. conjures these pulse-pounding tales to share with those kindred readers looking for an exciting escape. Her alternate identity enjoys spending time with her workaholic husband and their sidekick rescue dog, traveling to interesting locales (San Diego Comic-Con), and enjoying life to the fullest with an amazing group of family and friends and a good glass of wine.
Check out J.T.’s latest adventures on her website (www.jtbock.com) or find her by flashing her initials in the sky, opening up her favorite bottle of Pinot Noir. 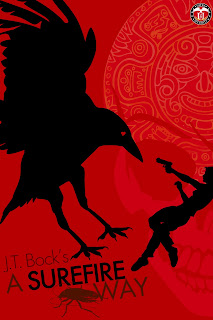 UltraAgent Surefire’s plan is simple: Capture the transhuman thief Raven. Win back the respect of her father. Get a raise.
Easy, right?
Except Surefire just broke the number one rule of her employer, UltraSecurity, a niche security firm that solves crimes committed by genetically enhanced humans like Raven. She trailed Raven into a warehouse without backup. And something more powerful than any transhuman is waiting inside.
Raven’s plan is simple: Atone for his past crimes. Return stolen spiritual artifacts to restore the world’s balance. Don’t get caught by UltraSecurity.
Easy, right?
Until a spunky UltraSecurity agent is suddenly on his tail, although Raven wishes she was on … well, never mind … he can’t get distracted from his mission. Because she’s followed him into a warehouse filled with his reclaimed relics, and Raven’s ex-partner in crime is about to unleash a supernatural-sized complication into his plan.
His old partner has accidentally summoned an Aztec god who will destroy the world unless Raven stops this spirit with a superiority complex. To do this, Raven must team up with Surefire and reveal the truth about his powers, exposing her to a force that can either save the world or destroy them both.
Following Raven into that warehouse throws Surefire into a surreal world filled with moody gods, day-glo skulls, dizzying dimensional portals, maniacal half-roach magicians, and a sexy thief who is more than he appears under his snug t-shirt. Is Raven a criminal, or is he working for a higher power? Surefire needs to be certain, because if she joins him on this mission, she’ll have to surrender everything she believed in for a surefire way to save the world, discover her destiny and find true love. 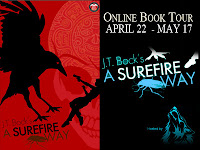 * Disclosure of Material Connection: I am a member of Paranormal Craving Book Tour and a copy of this book was provided to me by the author. Although payment may have been received by Paranormal Craving Book Tour, no payment was received by me in exchange for this review. There was no obligation to write a positive review. All opinions expressed are entirely my own and may not necessarily agree with those of the author, publisher, publicist, or readers of this review. This disclosure is in accordance with the Federal Trade Commission's 16 CFR, Part 255, Guides Concerning Use of Endorsements and Testimonials in Advertising.