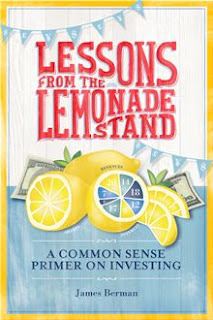 Written for aspiring investors of all ages, Lessons from the Lemonade Stand explains everything you need to know in the context of that most classic of all American businesses: the corner lemonade stand.

Rooted in the fundamental truth that "common sense is the best investment tool," the book slices important concepts into simple sections, sweetening them with folksy, easy-to-read language. The trials and tribulations of lemonade stand owner Lucinda highlight every concept from interest rates to retirement accounts to leverage. Learn investment basics as you follow Lucinda Lemonade Inc. along its sweet (and sometimes sour) journey as a start-up, from the squeeze of the first lemon to its initial private equity deal and its eventual foray into tech, all in the tidy town of Lemonville.
Entertaining and fun, Lessons from the Lemonade Stand supplies readers with the ingredients they need to become savvy investors.

Apples and Oranges: Stocks and Bonds


“Investing is fun, exciting and dangerous if you don’t do any work.”


Meet Lucinda, who has just launched Lucinda Lemonade Inc. in the quaint, tidy town of Lemonville.

To open a lemonade stand requires capital — that is, money. Maybe a buck or two here buys the lemons, and one or two there buys the sugar. There’s also a dip into the piggy bank for pitchers, along with crayons and paper for a sign. Rent is not a problem for most lemonade stand owners. The start-up capital – the money required to get going – is minimal.

Let’s assume for the moment that Lucinda’s lemonade stand is doing a brisk business, and she wants to expand her operation, perhaps by setting up a second stand on Main Street. She runs into a small problem in her exciting expansion: she needs more money.

Lucinda considers going to a bank for a loan but worries they would never lend money to her tiny business. She has the idea of raising money from a few friends by selling pieces of this profitable and growing business. If Lucinda decides to sell a piece of the lemonade business, she’s selling stock  This is an excerpt from James Berman’s book, Lessons from the Lemonade Stand: A Common Sense Primer on Investing (2012). For more information, visit www.lessonsfromlemonade.com.

or if you want to be particularly highbrow about it, equity . If she divides the business into tenths and sells one-tenth of the business to her neighbor Liam, she’s sold one share of stock.

The process goes something like this: Lucinda sells a piece of the business  that is one share of stock  for $10. Two things are now different. One is that Lucinda’s business has $10 in the piggy bank that it didn’t have before (enough to buy new signs and a table and pay her new assistant). The other is that Liam now owns a piece of the business. That means that he’s entitled to one-tenth of the value of Lucinda’s business going forward, whether that value goes up or down.

Now let’s turn to Liam, who is Lucinda’s first passive investor . Liam is an investor because he’s risked some money for a slice of the action, and he’s passive because he doesn’t take any day-to-day role in running the business. The closest he comes to being involved with the business is stopping by for a free cup of lemonade; he often feels entitled to do this as a shareholder, someone who owns a share of stock in a company. He has traded $10 for a tenth of the business, which effectively values the business at $100. In fact, we can say the lemonade stand business has ten shares outstanding and a valuation of $100:

There’s no guarantee Liam will get his $10 back. There’s no guarantee he will ever make money on his investment. He might even lose it all. This is an excerpt from James Berman’s book, Lessons from the Lemonade Stand: A Common Sense Primer on Investing (2012). For more information, visit www.lessonsfromlemonade.com.

So why does our investor invest? Because he feels that he will make money  that is, get a return on his investment. A share of a business that does well can become valuable. If Liam owns a share in a successful business, he can do well for himself.

So how will he get this return? Let’s assume that the second lemonade stand really takes off. At some point, $10 will start to look like a small price to pay to own one-tenth of a business that is selling buckets of lemonade. Liam’s neighbor Ella gets wind of their success. She thinks that one-tenth of this dynamic business is worth more than $10. She offers to give Lucinda $11 in exchange for an additional share. Lucinda balks at the offer. After all, she doesn’t need any additional funds at the moment, and she doesn’t feel like selling an additional piece, or additional equity, in this growing venture. Every piece she sells leaves less for herself. So Ella approaches Liam one day as he sits and tests the product on the stoop of his house. She asks if he would like to sell his share in the lemonade venture to her for $12. Liam thinks about it for a minute, decides he’s sort of sick of the lemonade thing anyway (having already had more lemonade than any person logically should in a lifetime) and realizes that if he sells his share for $12 to Ella, he’s made a quick 20% return on investment (ROI) in the form of a capital gain, an increase in the value of his share:

* Disclosure of Material Connection: I am a member of Pump Up Your Book. Although payment may have been received by Pump Up Your Book, no payment was received by me in exchange for this publication.  This disclosure is in accordance with the Federal Trade Commission's 16 CFR, Part 255, Guides Concerning Use of Endorsements and Testimonials in Advertising.