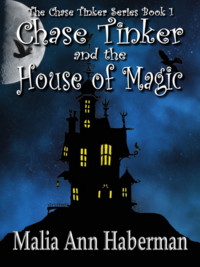 
In Chase Tinker's world, magic, lies and secrets can be a lethal combination...

Thirteen-year-old Chase Tinker can't understand why he has the power to move things with his mind. Besides that, his dad has been missing for over a year, causing his mom to be too upset to pay much attention to her sons, so now he's been busted for shoplifting. As if this isn't enough to worry about, his younger brother Andy suddenly has a weird magical ability too. Can things get any crazier? Chase thinks.

Then, a grandfather they thought to be long dead arrives at their door. He wants Chase and Andy to come visit him so they can learn about their supernatural heritage and why they have magical powers in the first place.

The boys soon find out that Grandfather, along with their cousin Janie, lives on a remote island in the middle of Puget Sound in an out-of-this-world house where fantastic magic can be found in practically every room, stairway and corridor. Chase can't believe their dad has been keeping so much from them.

It's an even bigger shock when Chase learns that all their magic is controlled by a powerful and mysterious Relic in the attic, and if anything happens to this relic, every bit of Tinker magic will be lost forever. He's even more disturbed when he learns his family has a dark and powerful enemy that is determined to steal all their magic, their house and their relic.

Now Chase must find a way to stop these evil beings, while at the same time figuring out what has happened to his dad, unraveling even more Tinker lies and secrets and not letting on that he has a huge crush on the housekeeper's daughter.


About the Author, Malia Ann Haberman: 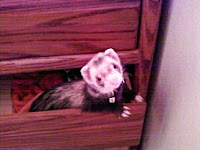 First, here's a picture of Wyatt.

He likes: playing , sleeping, shoes, music, dancing, people, his toys, causing trouble, and of course, my Chase Tinker series, my poetry and all the other things I write. Wyatt's favorite character in my Tinker books is Maxwell because he's a ferret too. :)

So here's a few things about myself:

I hate onions, eight-legged freaks, bigotry, bullying, rude people, waiting in line, jogging, getting up early, fleas and the middle of winter when it gets dark at 4:30 in the afternoon.

I keep Christmas lights up in my house year round. It know it's weird, but they're so colorful and festive. Besides, I'm sort of afraid of the dark and they make very lovely night lights.

I never devloped wisdom teeth, but I like to think it's not because I'm not wise, I'm just more evolved. :)

I have TERRIBLE motion sickness. I can't even watch or play a video game with too much movement. It really sucks.

I don't know why, but kids and cats always really like me.

I have two awesome daughters and four wild and crazy ferrets.

I've had a lot of different jobs (cashier, ballroom dance instructor, proof operator, car salesperson, receptionist, server, bartender, AutoCAD drafter, office clerk, real estate agent, hand assembly worker, ferret-sitter), but more than anything, because I love reading so much, I've always just wanted to write 'Tween/Teen books for all the 'Tweens and Teens out there to enjoy and look forward to reading.

Malia pens "Chase Tinker and the House of Magic" in a fantasy plot that is very well written, very descriptive, flows smoothly and totally magickal. Her characters were very believable and lovable to the point where I was totally captivated by it all. Between the twists, turns and the cliffhanger at the end, it will keep you guessing and waiting for the next book in the series. And...if you head over to her website, she has a section of deleted scenes that you don't want to miss. A great book for middle school age and adults.

I give "Chase Tinker and the House of Magic" a 5 star rating.

*Disclosure: I received the above product(s) from the author in exchange for an honest review and in no way was I asked to give a positive review. I received no compensation for this publication. My opinions are my own and may differ from those of your own. This disclosure is in accordance with the Federal Trade Commission’s 16 CFR, Part 255, Guides Concerning the Use of Endorsements and Testimonials in Advertising.