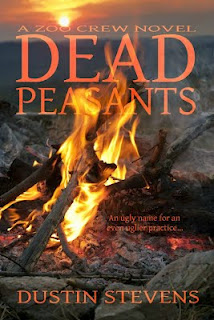 Bargain Mart, long a fixture in the Missoula economic structure has fallen on hard times. Things are dire, and if a financial windfall doesn’t arrive soon, their doors will close.

Answering the phone on the other end of her call for help is Drake Bell, third year law student at the University of Montana. Joined by his partner Ava, and his loyal friends the Zoo Crew, Drake must attempt to make sense of the case Alice presents him.

A case that only grows more complex as people continue to pass in Missoula, all with ties to Bargain Mart, all with large life insurance policies attached to them. Policies known in the corporate world as Dead Peasants…


About the Author, Dustin Stevens:

I originally hale from southern Ohio, growing up in the heart of farm country, and still consider it, along with West Tennessee, my co-home. Between the two, I have a firm belief that football is the greatest of all past-times, sweet tea is really the only acceptable beverage for any occasion, there is not an event on earth that either gym shorts or boots can't be worn to, and that Dairy Queen is the best restaurant on the planet. Further, southern accents are a highly likeable feature on most everybody, English bulldogs sit atop the critter hierarchy, and there is absolutely nothing wrong with a Saturday night spent catfishing at the lake.

Since leaving I've been to college in New England, grad school in the Rockies, and lived in over a dozen different cities ranging from DC to Honolulu along the way. Each and every one of these experiences has shaped who I am at this point and I have developed enormous affinity for locales and people of every size and shape.

By day I work as a healthcare attorney in Honolulu, focusing largely on health policy and implementation. By night I am usually found barefooting along one of Oahu’s many beaches before heading inside to write. Dead Peasants is my eighth novel, and the second in The Zoo Crew series. I am currently working on the follow-up, along with a handful of independent projects.


Learn more about Dustin and his books on:
Website
Blog
Amazon Author Page

Dustin pens "Dead Peasants" in a fast paced, original plot that flowing nicely. I found his characters to be well developed and believable in this legal thriller. I was a bit lost at first since I haven't read the original story 'The Zoo Crew' but caught on pretty quickly as I read along. A must read for everyone.

I give "Dead Peasants" a 4 star rating.