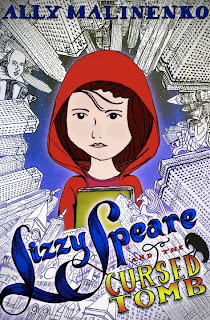 …a normal twelve year old girl with a talent for writing, who has a very not normal family secret. And when Lizzy’s father vanishes, that secret will change her life in ways unimagined. (Spoiler Alert! It turns out that Lizzy, or Elizabeth S. Speare, is the last living descendant of William Shakespeare. Shhh! Don’t tell anybody!)

Then Lizzy and her best friend Sammy are kidnapped, awakening in the faraway land of Manhattan. Their host is Jonathan Muse, whose job is to protect Lizzy from becoming the latest victim in a family feud nearly five hundred years old. Could that be why the mysterious, eye patch-wearing Dmitri Marlowe is after her? (Spoiler Alert 2—he’s the last living descendant of Christopher Marlowe, a friend and rival of Shakespeare’s. But keep it to yourself!) Is Marlowe after Lizzy’s family fortune rumored to be kept in Shakespeare’s tomb? Does he seek artistic immortality? Or Revenge (with a capital R) for a death long, long ago?

In a dangerous game of cat-and-mouse, Lizzy and Sammy are thrust into the realm of the mythical and fantastic—from satyrs and Cyclopses to Middle Eastern cab drivers and Brooklyn hipsters—in what is truly “an improbable fiction” as the Bard himself once wrote.


About the Author, Ally Malinenko:

Ally Malinenko lives in Brooklyn where she wakes at an ungodly hour to write. She's had poetry and stories published online and in print, including her first collection of poems, entitled The Wanting Bone (Six Gallery Press). Her second book of poems, Crashing to Earth, is forthcoming from Tainted Coffee Press.

Her children's novel Lizzy Speare and the Cursed Tomb, the first part in a series, is forthcoming from Antenna Books.

Learn more about Ally and her books on:
Blog
Twitter
Goodreads

Ally pens "Lizzy Speare and the Cursed Tomb", a creative adventure sort of mixing Shakespeare and mythical creatures, in a plot that is totally unique. A whimsical novel about growing up and discovering yourself, I found the characters were well written and strong, especially Lizzy herself. Highly recommended for young middle grade readers.

I give "Lizzy Speare and the Cursed Tomb" a 5 star rating.