"The Garden The Unauthorized Biography Of Adam and Eve" by Paul T. Harry {Book Review}

"The Garden" is a novel that shows a totally different tale of Adam and Eve which actually made a bit more sense to me than the original story.  The plot was well written even though, at times, I had a hard time following what was happening, it all came together at the end. Paul pens his characters believable and interesting although I would have like to see a character map instead of going back to find out who was who. Recommended to all readers.

The completed work now features a character plat to help with understanding who all the characters are, and two new additional scenes. One scene explains what happens to Mikatta and the other is a scene between Eve and Kane when Kane is forced to flee New Eden. These new scenes tie up some loose ends.

About the Author, Paul T. Harry: 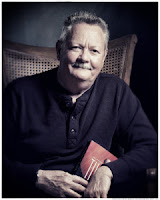 Paul T. Harry attended the University of Nevada Las Vegas as an English major with a theater arts minor before beginning his career as a writer and music producer. He also worked as an editor with Second Avenue Songwriter’s magazine and has spent the last 30 years writing novels, screenplays and short stories. Paul is married with four children and resides in Gold Canyon, outside Phoenix.

Purchase "The Garden" on:
Amazon