A Political Affair isn’t Fifty Shades of Red, White, and Blue, but it is a love story with spice and political intrigue. Stephen McEvoy never expected to fill his father’s U.S. Senate seat at such a young age—or to fight to keep it. When clever Anne Norwood interns in his office, Stephen dismisses her as another pretty face—until her independent streak catches his attention. They’re both too smart to fall for one another, yet they do. During a tough election, their relationship is an impossible political gamble. Campaigns—like love—are either won or lost.

Purchase on
Amazon / Paperback from Publisher

Even before she graduated from law school, Mary knew she wasn’t cut out to be a real lawyer. Drawn to politics, she’s spent her career as an organizer, lobbyist, and nonprofit executive. Nothing piques her interest more than a good political scandal or romance, and when she stumbled upon writing, she put the two together. A born Midwesterner, naturalized Texan, and transient resident of Washington, D.C., Mary now lives in Northern California.

Twenty-five year old Charlotte “Charlie” Barrow is caught between her old life, and the one she is beginning to build, when she crosses paths with a handsome stranger on the subway. Not looking for romance, she closes her heart off to the possibilities of love. With a knack for mishaps, Charlie maintains her sense of humor while befriending the kind stranger who seems to be there at all the right times. New York freelance writer, Charlie Adams, is forging his own path beyond the expectations of the society circles of his childhood. Rejecting family money, and fast-lane friends, he is snubbed by his family as he follows his own compass to a life more extraordinary. Through a coincidence of events, they come to rely on each other for comfort. This is the tale of two Charlies learning to trust again while fighting their fates to create their own destiny.

S.L. Scott is a former high-tech account manager with a journalism degree pursuing her passion for telling stories. She spends her days escaping into her characters and letting them lead her on their adventures. Live music shows, harvesting jalapenos and eating homemade guacamole are her obsessions she calls hobbies. Scott lives in the beautiful Texas Hill Country of Austin with her husband, two young sons, two Papillons and a bowl full of Sea Monkeys. www.slscottauthor.com

These wonderful authors are giving away a Kindle ($75 GC) for their BLAST! It starts December 4th and ends December 22nd. 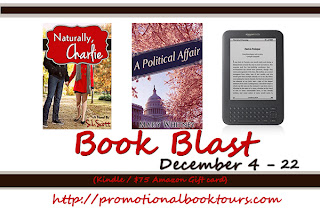