"Hera, Queen of the Gods" by T.D. Thomas {Book Review} 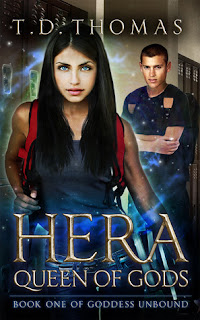 
The Fates are missing. Hera has no choice but to lead a handful of gods to the human world to search for the missing goddesses, even though it means giving up her powers and temporarily becoming mortal. But mortality begins to change Hera in unexpected ways, and it gets much worse after she meets Justin, a boy who defies every prejudice she once had about mortals. Torn between who she's becoming and who she needs to be in order to fulfill her duty, Hera must survive a horde of murderous creatures sent to exploit her new weakness. In the end, only she can stop a traitorous plot conceived by a secret alliance of ancient and new enemies, a plot that threatens to destroy not only the order Hera is sworn to protect, but all of existence itself.


About the Author, T.D. Thomas:


When not battling to save Azeroth from its latest calamity, T.D. Thomas lives and works in the frosty north known as Canada. He lives with six of his closest friends, all of whom are ruled over by a little white dog named Teo, who firmly believes he's a reincarnated Egyptian pharaoh and demands to be treated as such. Favourite things include temperatures above 0 degrees Celsius and cats who don't take guff from pretentious little white dogs.


Learn more about T.D. and his books on:
Website
Amazon
Goodreads

Purchase "Hera, Queen of the Gods" on:
Amazon

T.D. pens "Hera, Queen of the Gods" in a plot that was well written and packed with action, magick and romance. Knowing a bit about Greek Mythology, Gods and Goddess, I had no problems following the story, and honestly feel that anyone that has a basic knowledge (which 99% of us do in one way or another) will be able to follow along also. A well crafted story with strong characters that I recommend to all YA and not so YA readers.