"The Color of Evil" by Connie Corcoran-Wilson {Book Review} 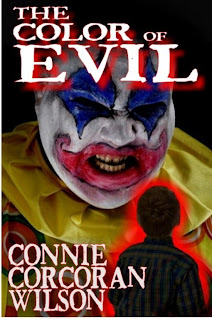 Tad McGreevy has a power that he has never revealed, not even to his life-long best friend, Stevie Scranton. When Tad looks at others, he sees colors. These auras tell Tad whether a person is good or evil. At night, Tad dreams about the evil-doers, reliving their crimes in horrifyingly vivid detail.

But Tad doesn’t know if the evil acts he witnesses in his nightmares are happening now, are already over, or are going to occur in the future. He has no control over the horrifying visions. He has been told (by his parents) never to speak of his power. All Tad knows is that he wants to protect those he loves. And he wants the bad dreams to stop.

At Tad’s eighth birthday party (April 1, 1995) in Cedar Falls, Iowa, the clown his parents hire to entertain Tad’s third-grade classmates is one of the bad people. Pogo, the Killer Clown (aka Michael Clay) is a serial killer. So begins 53 nights of terror as Tad relives Pogo’s crime, awakens screaming, and recites the terrifying details to his disbelieving family. The situation becomes so dire that Tad is hospitalized in a private institution under the care of a sychiatrist–who also does not believe the small boy’s stories.


About the Author, Connie Corcoran-Wilson: 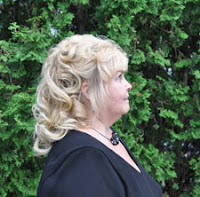 Connie graduated from the University of Iowa with a degree in English and Journalism, but she began writing for her hometown (Independence, Iowa) newspaper at the age of 10 and was Editor-in-Chief of her high school newspaper. She continued her education, including a Ferner/Hearst Journalism Scholarship and a Freshman Merit Scholarship at Iowa, and then at Berkeley, WIU, NIU and the University of Chicago. Connie holds a Masters (+30) in English, Journalism and Education. Her career path led to teaching 7th and 8th grade language arts (Silvis, Illinois) and teaching writing at 6 IA/IL colleges or universities, including a  class teaching film at Black Hawk Junior College. She then established the second Sylvan Learning Center in the state of Iowa and a Prometric Testing site, in conjunction with ETS of Princeton, NJ. She has taught writing and literature classes at all 6 IA/IL Quad City colleges.

A life-long film buff, Connie began reviewing for the Quad City Times newspaper (Davenport, IA) in the ’70s and continued reviewing into the ’80s. She also reviewed books for the Times and interviewed local celebrities for the (Moline, IL) Daily Dispatch and wrote humor columns for Metro East and the (Rock Island, IL) Reminder.

Connie left the labor of love reviewing film when she founded the first of two businesses in 1987, Sylvan Learning Center #3301, and her second business, a Prometric Testing Center (Bettendorf, IA), in 1995. Both businesses and two children kept her busy during the years 1987 – 2002, but, since selling the two successful businesses she founded and served as CEO, she has produced 10 books in 9 years. An active voting member of HWA (Horror Writers’ Association) Connie’s  novel Out of Time was released in December of 2009 by Lachesis, and several other solo projects are in the works.

Connie lives in East Moline, Illinois with husband Craig and in Chicago, Illinois, where her son, Scott and daughter-in-law Jessica and their newborn twins Elise and Ava reside. Her daughter, Stacey, a graduate of Belmont University in Nashville, Tennessee, has been living and working in Australia since February of 2012.

In addition to HWA, she is a member of Delta Kappa Gamma Professional Society for Women Educators, IEA/ NEA, IWPA (Illinois Women’s Press Association), AWP (American Writing Program), MWC (Midwest Writing Center) and MWA (Midwest Writing Association). She maintains her own blog (www.weeklywilson.com) and was named 2008 Content Producer of the Year for the 400,000 member Associated Content blog for her on-the-spot reporting of the 2008 Presidential campaign, fodder for her next nonfiction book. She covers film, television and politics for Yahoo as a featured contributor.


Learn more about Connie and her books on:
Website
Blog
Goodreads

Purchase "The Color of Evil" on:
Amazon

"The Color of Evil" is a real chilling, roller coaster riding horror story with really interesting characters. Even though it was a bit slow in the beginning for me, it caught my attention once story got underway and didn't let go. I would recommended this for all adult readers who love the thrill of horror.

* Disclosure of Material Connection: I am a book tour host for Free Book Dude and a copy of this book was provided to me by the author. Although payment may have been received by Free Book Dude, no payment was received by me in exchange for this review. There was no obligation to write a positive review. All opinions expressed are entirely my own and may not necessarily agree with those of the author, publisher, publicist, or readers of this review. This disclosure is in accordance with the Federal Trade Commission's 16 CFR, Part 255, Guides Concerning Use of Endorsements and Testimonials in Advertising.