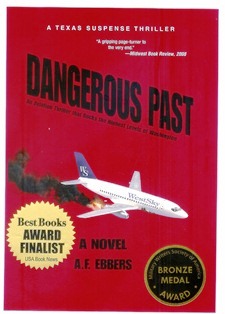 
Airline Captain Frank Braden and his wife Nicole are suddenly stalked by professional assassins who have a deadline to make their deaths look like an accident or a suicide. And the couple doesn't know why they are being targeted. They don't realize that they stand in the way of a deadly conspiracy. Little by little they are pulled into a dangerous web of intrigue by a murderous criminal network that deceptvely offers the pilot his wife's life if he will concede to their demands. This is a thriller that rocks the highest levels of Washington.


QUESTION: If your book was being made into a movie do you already have actors in mind for each role? What bands/singers would you put on the soundtrack?

If I were the director of a movie of my novel, Dangerous Past, I'd chose Mel Gibson as the thoughtful, courageous and determined Frank Braden (airline captain) and Cate Blanchlet as his strong, smart, lovely wife, Nicole.

QUESTION: What inspired you to write first book?

Years of living among my fellow humans. Some were funny, some were outright obnoxlous and most were the nicest people I've ever met. They had, like me, their dreams of the future and they all had their idiosyncrasies in the way they express themselves. Some had such unique ways of expressions that never left my mind and as a writer I knew that they were going to be in my book one day. Once I met a lady who wore a sweatshirt that read, "Be careful of what you say to me because I might put you in my next book." How true. Remember, always write about what you know.

QUESTION: What is the first book that you remember reading?

I believe it was King Arthur and the Knights of the Round Table.

QUESTION: In your opinion what is the best movie adaptation of a book you've read?

QUESTION: What are your current projects:

I have another completed screenplay that I'm converting into a novel. Dangerous Past was once a screenplay which received praise in contests but not optioned by the few movie companies which read it.


QUESTION: Why do you use a pilot as your lead male protagonist?

That’s easy. I have been flying for nearly 50 years, first as a Sunday private pilot, then as a commercial ferry pilot and later for military, corporations, and airlines and I write realistically about what I have experienced.

For example, when I was younger, I free-lanced an article in 1960 for the Columbus Dispatch Magazine (OH) about a cold mine disaster near Columbus during the early thirties. I looked up the old newspapers from the thirties, located photos and even got to interview one of the miners who were in the disaster. It was the lead article with photos on the magazine’s front page.  At that time I thought I knew everything about cold miners so I decided to do a short story on cold miners in a disaster. But what did I really know about the life of a cold miner; the fears in a deep, poorly lighted small underground tunnel, the heavy labor, the sweat, the dirt and dust, the poor pay to support a family during the Great Depression. I knew nothing of this.  My story was rejected by every magazine.

Since that time frame I try to write realistically about what I have experienced. Most of the places in this novel are real because I’ve been there: from Vietnam to Europe to Asia to Washington to Texas and most places in-between. I create characters using a combination of real and imaginary personalities. My motto for writing fiction is write what you know.


About the Author and Guest Post by A.F. Ebbers: 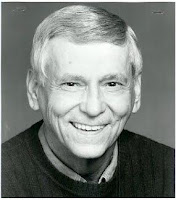 A. F. Ebbers, a journalism graduate of Ohio University was a reporter/writer for major newspapers, ad agencies, and in public relations for Cessna Aircraft Company.  He also graduated from Army Flight School and flew for the Ohio and Kansas Army National Guards. Later he was called to active duty and served two flying tours in Vietnam. After retirement from the military, he flew for corporations and for regional airlines. A dual rated ATP pilot, he has written for numerous national magazines, Sunday supplements and trade and travel magazines and has written screenplays and short stories. Today he lives with his wife in the Austin, Texas area and, when not writing, enjoys tennis, flying and piano. Dangerous Past is his debut novel.

You can purchase "Dangerous Past" on:
Amazon
Barnes & Nobel


Disclosure: I received the above product(s) from the company in exchange for an honest review. I received no compensation for this publication. My opinions are my own and may differ from those of your own. This review is brought to you by Charisma Media. This disclosure is in accordance with the Federal Trade Commission’s 16 CFR, Part 255, Guides Concerning the Use of Endorsements and Testimonials in Advertising.
Posted by Unknown at 12:00 AM