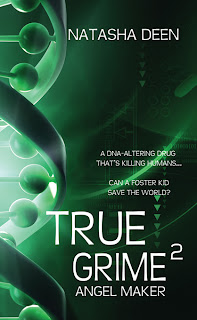 
For the last two years, human Aponi Runningbear has been training to be part of Grime, the magical police division tasked with protecting humanity from SOAP terrorists. But things aren't going well. She's barely keeping up with her studies, failing the physical component, and her Generalized Anxiety Disorder is making her bad days even worse. When her team is given the chance to find a missing coworker and stop SOAP from producing a DNA-altering drug that's killing humans, Aponi grabs hold of the chance to show she's meant for Grime. But as the investigation heats up, she's forced to deal with the tormentor from her past, dead bodies, and the certainty that SOAP's going to win this battle. Humanity's dying, Grime's in trouble, and she's failing...does a foster kid really have what it takes to save the world and herself?


About the Author, Natasha Deen:

When I was little, there was only one thing I wanted to be: a superhero.  Then I realized that being a klutz was not, in fact, a super power, and my super weakness for anything bright and shiny meant a magpie with self-control could easily defeat me in a battle of wills.

What was a superhero in training to do?

I turned to writing young adult, urban fantasy, and romance as a way to sharpen my mental super-hero skills, and as a way to bide my time until I can hone my klutzy nature into a superpower. I don’t get to orbit the earth in a space station (and thank God, because I get sick on merry go round), but I do get to say things like: “Stand aside! This is a job for Writing Girl!!”

Natasha pens "True Grime 2: Angel Maker" with strong well developed characters that you will find yourself relating to. A totally original plot that had a few bumps along the way, but once you got the hang of it, it will smooth out for you.  A good paranormal sci-fi read that is filled with action and suspense.

* Disclosure of Material Connection: I am a member of Full Moon Bites Blog Tours and a copy of this book was provided to me by the author. Although payment may have been received by Full Moon Bites Blog Tours, no payment was received by me in exchange for this review. There was no obligation to write a positive review. All opinions expressed are entirely my own and may not necessarily agree with those of the author, publisher, publicist, or readers of this review. My Cozie Corner is not responsible for sponsor prize shipment. This disclosure is in accordance with the Federal Trade Commission's 16 CFR, Part 255, Guides Concerning Use of Endorsements and Testimonials in Advertising.