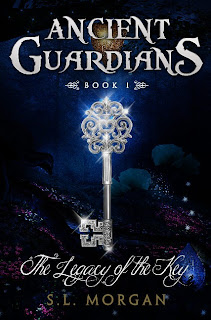 
No matter where you are, facing your reality with passion and purpose will always lead down the path you were intended to go.

While Reece Bryant is making her way through this world on her own, she is suddenly confronted with the truth of her existence, and the reality of her future. It is when she encounters two alluring and mysterious men, that a series of extraordinary events takes place, putting Reece’s life in grave danger. With her life in the balance, Reece must blindly trust the two mysterious strangers; and when she does, she is brought into an enchanting world that is beyond her logical comprehension.

This captivating land reveals new worlds and new dimensions to which her existence is paramount. But it is once she falls in love with the stunning Levi Oxley that everything will change, and Reece’s life will be in more danger than ever before.

Forced to return to Earth and face a Council of Worlds, Reece discovers there is more to this enchanting dimension than she could have ever imagined.

At a moment’s notice, even thru the fog of our denial, our journey can become crystal clear. And within the revelation, once our fear subsides, we can find contentment and purpose if we focus on the things that matter most. Trust—Courage—Love.


How to write believable characters

I wanted to write about this particular subject because, in my opinion, having believable characters is the heart and soul of a novel. As authors, when we create our fantasy world (or whatever you may refer to it as) we are faced with many issues; the biggest of which is making fiction feel as though it were real. Drawing a reader into our fictional novels and making them believe they are really living in this story is quite a task. I strongly believe that if the characters are well-written and believable, the reader will easily become captivated by your story.

When I read novels, it has always been the characters that have drawn me in. I either want to know more about them, be friends with them, or marry them. I think most readers are that way. In my opinion, it doesn’t matter if Mr. Darcy and Miss Elizabeth (from Jane Austen’s, Pride and Prejudice) lived on Mars; I am so attached to those characters and their story that I would happily accept living on Mars with them. These are the things I kept in mind when I wrote Ancient Guardians: The Legacy of the Key.

In my book, the readers are swept into an alternate dimension. The events that happen throughout this book had me wondering if my imagination had finally validated that I might very well be crazy. I felt like I was taking a big risk writing something I knew nothing about (such as inter-dimensional travel and alien species). I’ll be honest with you, I’ve never worked for NASA, and I’ve lived on Earth my entire life. This is why I needed my characters to get my back. They had to be believable, and the readers had to be drawn to them or the storyline might have been a little flat.

So, in order for me to make a character believable, I have to believe they really do exist. I have to know their personalities, what makes them happy, sad, emotional, and humorous. It may help to sit down and write an outline of your characters. Give them personality. Set their stories up, know their history, and know who they are. Once you have done this, it’s time to play their parts. This was my absolute favorite part of writing. In my book, Reece Bryant is my main character and I wrote the entire book in her point of view andI really enjoyed playing her role. She’s not over dramatic and she’s not too confident. She goes through quite a bit at the beginning of the book, and it’s fun to react as Reece would to the bizarre circumstances she is faced with. Although this book is written through Reece’s POV, it is essential that know the characters that are interacting with her as well. For example, I have a scene where my characters are all in a room together, and the tension is so thick that you could cut it with a knife. In this scene, I know how everyone is feeling. I know who’s causing the tension, who’s threatened by it, and I know who’s trying to lighten the mood. I may be writing from one person’s point of view, but if I don’t know how everybody else in the room is feeling, I wouldn’t be able to write the scene.

I would equate being an author to doing what an actor does to prepare for a role. You have to become the characters, and when you are six different characters at once, it can make you a little schizophrenic at times. However, it’s really necessary for the development of your book. You need to fully immerse yourself and know your characters as if you are them. In this way, you won’t second guess what they do, or how they will react to any given situation. I am convinced that this is what makes the characters believable.

So, when writing your novel, enjoy playing your roles and being your characters…the end result is a very believable storyline, and readers who will walk away wishing they knew your characters personally.

S.L. Morgan was born and raised in California. After 29 years of living in the Sierra Nevada Mountains there, she and her husband began their journeys of moving throughout the United States. She currently lives in Texas, where she and her husband are raising their three children.

In October of 2011, S.L. Morgan became inspired to write her new novel series, Ancient Guardians. With her passion and love for Jane Austen and other classic romance novels, she was motivated to write a novel series of her own. The Legacy of the Key is the first book in her novel series, taking readers not only into a new magical dimension—but giving them a feeling that they have been transported back in time—into England’s seventeenth century.

With her second novel in this series nearing its release date in late summer 2013, S.L. Morgan is currently writing in the third novel of the Ancient Guardians series, and is excited to bring her readers on more adventures and journeys with these characters.