{Book Review} "The Resurrection of Hannah" by Kathryne Arnold

* Disclosure of Material Connection: I am a member of Beck Valley Book Tours and a copy of this book was provided to me by the author. Although payment may have been received by Beck Valley Book Tours, no payment was received by me in exchange for this review. There was no obligation to write a positive review. All opinions expressed are entirely my own and may not necessarily agree with those of the author, publisher, publicist, or readers of this review. This disclosure is in accordance with the Federal Trade Commission's 16 CFR, Part 255, Guides Concerning Use of Endorsements and Testimonials in Advertising. 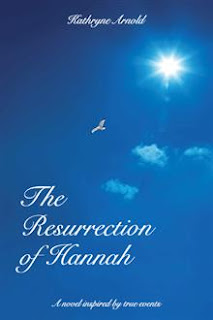 
Samantha Clark meets with a monthly group to delve into subjects of interest. They dabble in meditation, dream work, and hypnosis — just friends having fun. But lately Sammi is feeling off-kilter and plagued with poor sleep. Searching for a natural solution, she discovers a bitter herb known to induce slumber, whips up a concoction to sweeten the herb, and imbibes. Unbeknownst to her, these areas of experimentation are whirling together to form the perfect storm, one that will blow open an entrance in Sammi’s mind that leads to another world, a door that can never again be closed.

She becomes enmeshed with two friends in a tug of war between life and death: Melissa is dealing with a complicated pregnancy and Julie is wrestling with cancer. Adding to this turmoil is Sammi’s disconnect with her career as a psychotherapist; her life doesn’t seem to fit any longer. Into the drama walks Todd, a handsome, laid-back guy who lightens up her days. Trouble is, Sammi is having a hard time getting close, and a nagging sense of doubt and fear. Like so many times in the past …

But the topper to all this is the dreams. They begin innocuously…but quickly morph into mind-blowing spiritual adventures. The crazy nocturnal activity appears to be related to a soulful character trying to make himself known. In a quest to uncover the truth, Sammi researches clues discovered during her nighttime romps. What she finds is another facet of herself…all wrapped up in post-colonial 18th-century clothes. Sammi flies off to New England, and with the aid of the Rev. Clark, her skeptical father, she embarks on an adventure, revealing a tragic, centuries-old mystery. One only Sammi can solve.


About the Author, Kathryne Arnold:

I was raised in the northeastern United States, in the heart of Pennsylvania Dutch Country, and resided in a half-dozen homes or towns throughout my growing up years. My father was a reverend with a flourishing career, moving the family to various parishes as his calling dictated, which I view in a positive light as I was exposed to different communities and lifestyles. After graduating from high school at the age of seventeen, I moved with my father to Massachusetts.

Thrilled to begin college in New England, I jumped in with both feet and managed to excel in biological and psychological studies upon which I secured my very first "real" job as a Senior Psychiatric Counselor at a group home for adults with mental illness. Wanting to further my learning, I attended Suffolk University in Beacon Hill in Boston, and graduated two years later, obtaining a Masters degree in Counseling and Human Relations.   Over the next twenty years I concentrated further on my work in counseling and social services and became a licensed practitioner.

Several years ago, due to a deep longing to express my feelings in an alternative manner, I literally sat down one day and began writing my first novel. The resultant book, The Resurrection of Hannah, had been born out of a series of powerful dreams, along with compelling and coexisting experiences that inspired me to create a story that would capture the strength of my emotions. I had a yearning to shape a tale based around individuals in my life that I believed would make engaging characters. I had a strong desire to experience a higher level of creativity, to literally produce something out of nothing- a fascinating and challenging endeavor I could not ignore. It was during this time that I became a clinical hypnotherapist and a nationally certified counselor, as well as starting a private practice as a psychotherapist.   I also decided to move back to friends and family in Florida and worked again at the local Hospice, then more recently in community mental health. Once bitten by the writing bug, I could not help but pen my second work of fiction, The Fear of Things to Come. I am now in the process of writing another novel in what I consider a unique collection of adventure stories, the third in the Samantha Clark Mystery Series.

Purchase "The Resurrection of Hannah" on:
Amazon - US
Amazon - UK
Barnes and Noble

Kathryne Arnold pens "The Resurrection of Hannah" in a plot that deals with past lives and the metaphysical and physical planes. Between her great characters that were believable and relate-able with some humor thrown in, this spiritual read kept me hooked from the start. Filled with mystery, this fun, amazing read is highly recommended for all.

I give "The Resurrection of Hannah" a 5 star rating.