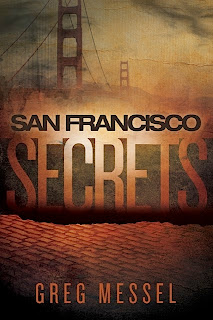 
Noted novelist and newspaper editor Edgar Watson Howe once said. “A man who can keep a secret may be wise but he is not half as wise as a man with no secrets to keep”

As the spring of 1958 arrives in San Francisco, it seems that baseball player turned private eye, Sam Slater and his fiancée, TWA stewardess Amelia Ryan, are surrounded by people who have secrets.

A prominent doctor, John O’Dell is being blackmailed by someone who has discovered a dark secret from his past.  When the private investigator trying to catch the blackmailer is murdered, Dr. O’Dell hires Sam Slater to try to pick up the pieces. Someone is playing for keeps and will do anything to protect their own secrets.

Meanwhile, Amelia begins her new job as an international stewardess which takes her on adventures to New York City, London, Paris and Rome. In hot pursuit is a womanizing older pilot who has his sights set on Amelia.

Their lives get even more complicated when a mysterious woman from Sam’s past returns.

Sam and Amelia’s relationship will be tested as they work together to solve the mystery on the foggy streets of San Francisco.

About the Author, Greg Messel:

Greg Messel grew up in the San Francisco Bay Area and now lives in Edmonds, Washington on the Puget Sound with his wife, Carol. San Francisco Secrets is his sixth novel and is the third in a new series of Sam Slater mystery novels. Greg has lived in Oregon, Washington, California, Wyoming and Utah and has always loved writing, including stints as a reporter, columnist and news editor for a daily newspaper.


Greg Messel pens "San Francisco Secrets", the third book in the 'Same Slater Mysteries Series' and the first one that I have read from this author, in a plot filled with mystery. Combining real historical facts with fictional characters that were strong, the author made the story line believable. This book was good enough to stand alone from the series, as I didn't feel I was missing all that much from the first two books....although I wished I had read the series from the beginning. A must read for all mystery fans.

I give "San Francisco Secrets" a 4 star rating.