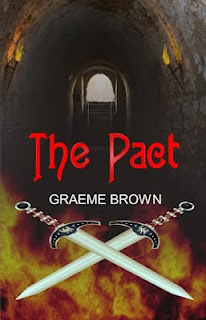 
Enter the world of Will Lesterall, a boy who’s grown up in the safety of his father’s castle. Tales of the outside world ruled by warring kings and creatures of nightmare have never seemed a threat, yet on the night celebrating the two hundredth year of the sacred Pact that has kept Fort Lesterall safe, a secret intrigue ripens, and in the course of a few hours Will is confronted with a choice greater than he can comprehend.

Join an unlikely hero as destiny pulls him into the middle of an ancient conflict between fallen gods and ambitious women, one that demands blood, both holy and wicked, and the power of an ancient fire bound in steel. As swords clash below a watching wood, hope and betrayal war as fiercely as fear and valor.

Whether he lives or dies, Will Lesterall will never be the same.

Graeme Brown is has been enchanted by the epic fantasy genre since he was a child, and consequently he started creating his own world with its stories at the age of thirteen. Influenced by writers like J.R.R. Tolkien, Robert Jordan, and George R. R. Martin, he has finally brought the first of those stories to life with his debut title, a short story called The Pact—48 pages that will whisk you away to a dark, medieval fantasy world with gritty realism. When he’s not writing, he can be found exploring number theory problems or writing computer programs, training for a marathon, or unwinding in a yoga hot room. He has also explored other facets of art, both as a hobby and a profession, including vector graphics, pen and ink, classical piano, and web design. Despite being a full time student and a junior editor for Champagne Books, he makes sure to do a little writing every day. He is presently busy with the first of many sequels to The Pact, A Thousand Roads.

Father’s voice cut through the din of the crowd. Will stopped and watched him. “By Garlon’s bloody balls, Stuart, you can’t lead a foray in the Outforest. That will only provoke the Troll scouts.”
Uncle Wood frowned, hands resting on his round belly. “I’m sorry, Ham, but I have my orders. King Barra requires that all or our outposts be secure.”
“The Outforest is bloody well secure!” Father slammed his crystal wine cup on the table. A timid blonde boy came to refill it. Will hated to see father so full of anger, but it happened all too often, ever since Mother died. “The Pact stands, but only as long as we hold our part. The Outforest belongs to the Unborns.”
“You’re still upholding your part. It’s Annon that’s moving in, not Lesterall.”
Father’s severe face, lined with age, reminded Will of cracks in an old statue. “Unborns make no distinction. Men are men. If the Trollwatch lines are broken and word gets back to Gholheim, then the Pact will be re-evaluated. I’ll not risk it, Stuart. I’m not jeopardizing the safety of my home.”
“Then join me. We can do this diplomatically, the way your ancestors did.”
“No!” Ham leaned toward his older brother. “Lesterall may be within the borders of Annon, but it is mine, and I will see to my affairs. You can march on Tharrannor, up to the bloody Trollwatch lines if you’d like, but not into the Outforest. If you do, then it will be war.”
“You wouldn’t!” Uncle paled.
Father looked like a teapot, ready to boil over, but he never got a chance. The double entry doors creaked as they opened, and a procession marched in hastily. Each of them wore armor.
Alter Dun led the group. As head knight of the Mountain Cats, he kept the watch in the northern marches. He removed his crimson helm, exposing a wide, ugly face, where moustaches sprouted from his upper lip like weeds. Several other knights Will didn’t recognize followed him, wearing the deep crimson-plated armor of the Mountain Cats or the black lobstered steel of the Darkwatch—those who prowled within the mountains themselves. About thirty in total, each sported double axes, the hafts crossing along their backs, giant crescent steel protruding above over their shoulders. Their broad builds marked them as the hardy stock of Annon, with matching ruddy beards of brown, brindle, or wild pumpkin orange. The only one who appeared out of place was one man in sullied white cotton and silvery steel. Xon, the exotic knight of legend from the West Isles, was said to move with such speed in battle he could fight ten men at once. The story of how he held Butcher’s Glade against a host of twenty Ogres singlehandedly was one Will heard from Jony and his uncle many times.
Less than legendary now, he walked stiffly, one narrow, slanted eye swollen and blue. He stopped before Will’s father, beside Alter. Will edged closer, but not enough to be conspicuous. Uncle Wood rose from his chair, but Father hadn’t stirred at all. He looked both angry and tired.
Alter bowed. “Lord Lesterall, I’ve come as quickly as I could.”
“I didn’t realize that my invitation extended to the Northwatch.”
“No, my Lord.” Alter’s gruff voice sounded rusty, as if he’d swallowed shards of metal. “We haven’t come for festivity, I’m afraid. I’m sure Lord Wood has informed you of the recent developments.”
“Oh, I’m afraid he has.” Father eyed his brother. “Are you coming to ask my permission too? Boy, more wine!” The serving lad, only a year older than Will, rushed forward to refill the cup. Father drained it.
Alter reached into a pouch at his belt. The large, red circle he pulled out looked like a coin dipped in blood. Will squinted. The smooth surface had no markings, a plain, shiny disc that shone in the Hall’s ruddy light. Gasps of shock echoed through the Banquet Hall. Soon a chorus of voices rose into a clamor. “The Pact is broken.”