{Book Review} "Words to Die For" by K.J. Dahlen

* Disclosure of Material Connection: I am a member of Charisma Media and a copy of this book was provided to me by the author. Although payment may have been received by Charisma Media, no payment was received by me in exchange for this review. There was no obligation to write a positive review. All opinions expressed are entirely my own and may not necessarily agree with those of the author, publisher, publicist, or readers of this review. This disclosure is in accordance with the Federal Trade Commission's 16 CFR, Part 255, Guides Concerning Use of Endorsements and Testimonials in Advertising. 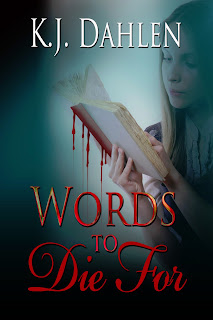 
Micah wants to take her to a safe house but Phoebe doesn’t want to go. No matter where she is she reasons Michael will find her but she isn’t going to run from him anymore.  They order pizza and when it comes they eat and strangely fall asleep. They don’t know but Michael intercepted it and sprinkled it with sleeping powder.

Then he kidnaps Phoebe and Micah and takes them to a warehouse where he tells her his side of what happened all those years ago. He tells her he didn’t commit the murders he was accused of and he didn’t deserve to be put in the institute. That’s where he learned to kill.

Michael doesn’t realize it but when he kidnapped Phoebe and the others he was seen by Captain Weeks. When Weeks moves in to free the others Michael is wounded but he escapes. When Phoebe gets home she finds Michael is already there. He demands the police bring his uncle Charlie to the apartment. When Charlie and Kallie get there Kallie admits it was Charlie who killed their parents and grandparents. Charlie threatened to hurt her if she ever told anyone. When Charlie makes his move against Michael he knocks Michael out but has a heart attack in the process. When Michael comes around he makes a play for his freedom. Taking Phoebe with him, they get away.

After a few hours’ sleep Michael leaves her but promises to let Micah know where she is. A few hours later Micah rescues her and instead of taking her home he takes her to a hotel. She thinks the nightmare is finally over until later that night Michael finds her again. He knows he can’t go to jail and he tells her he can’t stop killing. He knows his killing spree is over and there is only one way he’ll be stopped.

He wants her to call out for Micah. When she refuses he hurts her enough to get her to scream. When Micah asks her if she’s alright she tells him not to come in. She tells him Michael is with her. Micah knows he doesn’t have a choice. In the end Micah gives Michael the way out he wanted. Micah ends his brother’s life.

I  live in a small town (population495) in Wisconsin. From my deck I can see the Mississippi River on one side and the bluffs, where eagles live and nest on the other side. I live with my husband Dave and dog Sammy. My two children are grown and I have two grandchildren. I love to watch people and that has helped me with my writing. I often use people I watch as characters in my books and I always try to give my characters some of my own values and habits.

My book titles are: Bones, The Darkness Within, Meghan’s Legacy,  Shadow Chaser, Witness, Secrets and Lies, Legacy of Murder, The Unknown Son, The Prophet, No One to Hear You Scream, Bradbury Inn, Murderous Intent, Wrong Number, Fall from Grace, The House on Berkley Street, Cards Of Sin, Blood Memories.

My next books coming out are, Phoenix Rising, A Murder in her Past, Words To Die For and From Beyond Death.

K.J. Dahlen pens "Words to Die For" in a fast paced plot filled with suspense. The author's characters were believable and realistic in this suspenseful murder mystery thriller. With all the twist and turns, I wasn't sure what was going to happen next. A must read for all murder mystery fans. 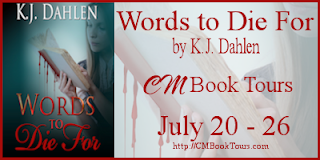