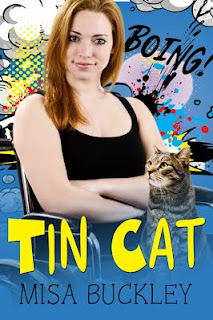 
A year after the accident that put her in a wheelchair, Amber Gerald has more or less gotten used to living with her impairment. It doesn’t make a difference to running a comic book store anyway, and the customers have been the best support group she could have wished for.

When she rescues an abandoned cat, Amber has no idea that she’s interfering in the mad scheme of a time travelling bank robber. Or that the man that walks into her store dressed like Blade is about to become her bodyguard.

Between being an unwitting owner of an android cat and falling for a cybernetic bounty hunter, Amber finds her life a whole new level of weird as science fiction becomes a very real factual threat.


About the Author, Misa Buckley: 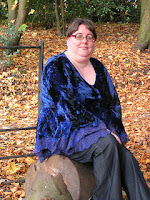 Born and raised in Manchester, UK, Misa Buckley grew up watching Doctor Who and Star Trek. She was fascinated by stars and space travel and avidly followed every Shuttle launch. But while TV fed her love of the future, books tapped into a fondness of fantasy, devouring books by Anne McCaffrey and David Eddings.

The extraordinary fascinated her, but growing up she’d rather be out horse-riding or practising her artwork than writing. It wasn’t until she’d married college sweetheart and had their first child that she discovered fanfiction, which offered her the chance to play in the universes she loved to watch.

After failing NaNoWriMo in 2007, Misa found another monthly challenge – JanNo – where she made some very good friends who encouraged her to break away from fanfic and write original. It took her a few years to take the step from writing to submitting, but her first novella was published in July 2011 (IRONHAVEN, Decadent Publishing).

A self-published novella followed almost a year later, after being aired weekly on her blog, with a second small-press contract released in July 2012 (ELEANOR’S HEART, Champagne Books). 2012 saw a further three contracts signed with Champagne, for releasing in 2013.

Though writing a much-needed haven from the crazy of raising five children and a Land Rover-obsessed husband, Misa also enjoys knitting soft toys and doll clothes, baking sweet stuff and cosplaying with the local Steampunk group. She has a motorbike that’s being loving restored and plans to take her test as soon as finances allow.