"Keeper of the Black Stones" by P.T. McHugh {Book Review} 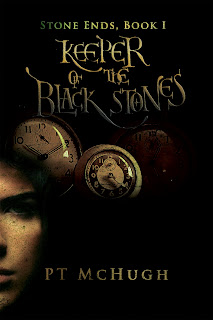 Jason Evans, a shy, introverted high school freshman, thought that his mundane life was all there was – girls, golf, physics, and the occasional bully. Until he found out about the secrets his grandfather had been keeping from him … a set of stones that allowed them to jump through time … a maniacal madman who used the stones to shape history to his liking … and Jason’s role as one of the few people in the world who could stop that man.

Against impossible odds, a fourteen-year-old boy must take up his legacy, learn everything he needs to know within one short day, and travel helter skelter into the Middle Ages, to join Henry VII’s fight against Richard III, end the Dark Ages, and stop the man who now holds his grandfather captive. In this romp through history, Jason and his friends must race against time to accomplish not one, but two missions.

And save the world.

About the Author, P.T. McHugh:

PT McHugh didn’t start out as a storyteller. He was, however, born into a family of that encouraged imagination. He became a fan of history in school and then went to college to become a construction engineer, to build a world of straight lines, angles, and equations.

He was just as surprised as everyone else when he realized that he believed in magic, and might just know the secret of how to jump through time. Since then, he’s been researching the possibility and learning everything he can about history. Just in case the opportunity arises.

PT was born and raised in New Hampshire and currently lives in Raleigh, North Carolina with his wife, two daughters, and a dog named Bob, daring to dream of alternate worlds and cheering for his beloved New England Patriots.

His latest book is the YA fantasy/time travel, Keeper of the Stones.

Purchase "Keeper of the Black Stones" on:
Amazon
Barnes & Noble

P.T. McHugh pens "Keeper of the Black Stones" in a nice, easy, smoothly paced plot filled with time travel and a touch of humor. I found his characters to be well developed and relate-able to the point where you actually cared what was happening to them. I totally enjoyed this book and look forward to more! Highly recommended for all time travel adventure fans.

I give "Keeper of the Black Stones" a 5 star rating.