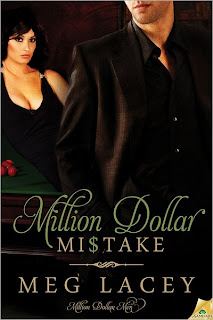 In addition to overseeing the financial affairs of the wealthy Kristoff family, Nicholas Demetrious specializes in hauling its rambunctious members out of trouble. Especially his distant cousin, Raven Rutledge.

The tabloids love her bad-girl antics, sexy pout, and body made for sin. Nicholas would love to spank the bejesus out of her, but this time the situation is too serious to entertain such a fantasy. A lucrative business deal with the Exeters is in jeopardy, and Jackson Exeter Sr.'s ultimatum is clear: Remove this man-eater from my country house, or the deal is off.

Raven is in way over her head. She accepted the invitation to the Exeters' Adirondack house party as a refreshing change from her jet-setting lifestyle-until she learns the guest list includes his entire family. His ex-girlfriend. And the junior Exeter's intention to propose.

If ever she needed suave, sophisticated Nicholas's persuasive powers, it's now. Then he's there with a plan to get her out of this tangle: sweep her off her feet. But their pretend passion turns all too real. And what started out as a weekend of fun threatens to shatter into betrayal and heartbreak.


About the Author, Meg Lacey:

Meg wrote her first novel in the sixth grade, her own version of a classic historical romance. However, her writing career didn’t last. Over the years, she’s been an actress, director, producer, creative director, copywriter, creative dramatics teacher, mime, mom, college instructor, and a school bus driver. She’s formed, and worked as a Vice President and as CEO of, two creative marketing and media companies in the Midwest.  She’s worked in all media, from network cable programming and corporate initiatives; to games and interactive websites. Through it all, she has always returned to writing.

She has written for Silhouette and Harlequin, and you can find her titles available in digital format at any online bookstore.

Meg pens "Million Dollar Mistake" in a fast paced plot filled with humor, deceit and romance. It was a bit confusing at times with all the different character interactions, but I found the book to be strong enough to keep you turning the pages.

I give "Million Dollar Mistake" a 4 star rating.