Welcome to My Cozie Corner's stop on the
"Tangled to Death" book tour.
This tour is brought to you by Innovative Book Tours. 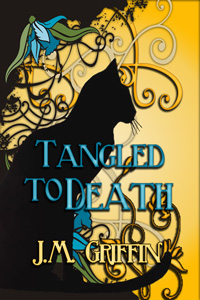 Artist Katie Greer, a.k.a. Katarina Granger, is determined to start fresh. A few years prior, when Katie’s parents were murdered, she survived her own near death experience only to receive relentless interrogations by a career driven Columbus, Ohio detective. Katarina Granger no longer exists in the art world or anywhere else.

The dream is the last vestige of the nightmare she’d lived through. Katie Greer has taken Katarina’s place and she’s determined to keep it that way. It isn’t long before Katie realizes a name change isn’t enough. Especially after she meets Detective Jonah Kilbride, a local cop in the New Hampshire city where Katie has relocated.

Settled into her new Zentangle studio where she teaches students to relax using a unique art form as therapy, Katie is comfortable with her new lifestyle. That is, until the morning she finds her arch enemy dead, covered with snow, seated on the wrought iron bench in the front yard of Katie’s combination home and business.
Detective Jonah Kilbride arrives to investigate Katie’s find when, without thought, she blurts out the identity of the dead woman. With keen eyes, a cool regard and an opportunity to see more of the woman who blatantly defies his every request, Kilbride returns again and again to speak with, question, and get to know the artist who tops his suspect list.

Unwilling to explain her past when Kilbride reveals he knows her true identity, she turns the table and asks him why he left his job on the New York City police force. Angry over his belief that she might have murdered her parents, they continue to goad one another. She refuses to accept the bait he tosses her way and offers him a taste of his own treatment. After all, she’d been under investigation before and had learned to survive endless questions and suspicion. She’d fought hard and won against a detective well known for his ability to break suspects, and she could do so again while proving to Kilbride she didn’t kill her parents, but she hadn’t murdered Flora Middly, the corpse sitting on her bench.

It isn’t until things heat up between Kilbride and Katie that she comes to trust him enough to share her darkest past moments with him. She talks about the dream and how it plagues her, while she works at finding the culprit who hated Flora enough to kill her and place blame on Katie. The killer and Kilbride have no idea how strong a person Katie has become or what she is willing to do to prove her innocence. Her life and happiness are at stake and Katie knows she’s more than capable of winning the game.

Kilbride is there at every turn, unable to allow Katie to jeopardize her life and his feelings for her. He’d lost one woman and wasn’t about to lose another. This time around, he wouldn’t take love for granted. He would risk everything he believed in to keep Katie from meeting death.

When Katie dares to confront the killer, Kilbride searches for her, worried he might be too late. After Flora Middly’s murder is solved, and Katie is safe, Kilbride finds he’s lucky in love after all. The dream that has tormented Katie is laid to rest. Her parent’s killer is disclosed by the detective who had so viciously claimed Katie was guilty.

As life quiets down and the Tangled Wings Studio becomes a hub of activity, Kilbride confesses his feelings for Katie who grows closer to him than she’d ever believed possible.

About the Author, J.M. Griffin:

With her books sold worldwide, J.M. Griffin is one of today's popular women sleuth’s authors.

J.M. is known best for her Vinnie Esposito series. The series, set in Rhode Island, the smallest state in the USA, is brought to life by a colorful cast of characters. Every novel has a blend of humor, mystery, and romance. J.M.'s latest novel in the series, Cold Moon Dead, is the fourth in the Esposito series.

Stepping away from Rhode Island's scenery, J.M. set Faerie Cake Dead on the coast of Maine. Filled with humor, faeries, sweet cupcakes, murder and a yummy hero, the villain is someone you’ll least expect.

J.M.'s release, Murder on Spyglass Lane, takes place on the west coast of Florida in the Sarasota area. This cozy mystery has a unique and hilarious blend of characters, a sexy hero, and a psychic heroine.

Tangled to Death was a mystery inspired by J.M.’s favorite art style, Zentangle. She set the story in New Hampshire with an unexpected corpse in the first scene. Wit and fun fill the pages of this novel.

J.M., her husband, and two wacky cats reside in a countryside village in western Rhode Island, where life is anything but mundane.

J.M. Griffin pens "Tangled to Death" a nice cozy mystery with plenty of twists, turns and strong characters to keep you reading. An enjoyable must read with a touch of romance and a surprise ending.

I give "Tangled to Death" a 4 star rating.