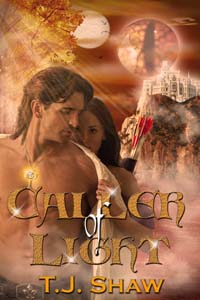 Carina McKay is an outsider. With one parent of royal blood, she's not nobility, yet not a servant either. The only comfort in her mundane existence is her love of Critons, the large fire-breathing creatures that protect the border of her homeland. But her destiny changes forever the day she catches the eye of King Marek Duncan.

Marek's heart is closed to love. After an arranged marriage withers to a bitter end, he dedicates his energy to protecting his kingdom. Yet he's searching for something more--the Caller of Light, the one who summons Critons.

Carina's beauty and willfulness intrigue Marek, and he's determined to have her. When his enemies try to come between them, he discovers just how much he will endure to protect her. Together, they can unlock a love that binds their souls, but only if they find the strength to follow their hearts.

He was about to inquire into Carina’s whereabouts when she emerged at the top of the stairs. She paused. Uncertainty flickered across her face. For a moment he thought she was going to fade back into the shadows of the upper floors. But she took a deep breath, squared her shoulders, and stepped off the landing.

He inhaled a ragged breath at the sight of her. Her dress accentuated the slight swing of her hips while the tight bodice molded perfectly to the swell of her breasts. With each step as she descended, a slow burn heated his blood, flooding hot desire straight to his groin. She shimmered in the soft light spilling from the room—a light acting as a path for her to follow, illuminating her way…to him.

She entered with her head bowed and lowered into a deep curtsy. “Your Majesty.”

He extended his hand and tried to keep his fingers from twitching in anticipation of her touch. She hesitated, and had yet to look him in the eyes. But she could not deny him, not without causing insult, so he waited. His body trembled when her hand slipped into his.

For the second time today, he couldn’t let her go. She had entered the room on a whisper, but swept across his senses like a winter storm. She was the calm, silent stillness just before the skies unleashed their wrath to prove yet again the power of the Mother Source. The sweet anticipation of thunder crackling through the air slammed through his defenses, yet her tranquil demeanor kept the sizzling turmoil at bay.

Her hair was arranged in elaborate curls and braids that exposed the delicious contour of her neck. As she continued to look down, her dark eyelashes contrasted against her pale skin. He resisted the urge to brush his thumb across the soft curve of her lips. She was a feast for his eyes to devour. He wanted to tell her that she looked stunning, but his voice failed him and he could only mutter her name in a gravelly, scrape of sound.

She lifted her chin and peered at him. He saw something within her troubled eyes. Confusion? Pain? Had he caused this? Guilt plagued his mind. He should’ve told her his true identity when he first saw her boldly petting FireStrike. But after he’d accidentally insulted her and she had stood defiant in front of him with her feet planted and hands fisted, her willfulness had struck him like a fire bolt. Her enthusiasm and spirit was a refreshing surprise that threw him off guard. His desire to maintain that brief illusion so he could enjoy her unshielded companionship had hurt her, and he was paying a heavy price for his omission.

Somehow, both of his hands now sandwiched her smaller hand in a possessive hold while he struggled to control his beating heart. He could only stare at her, his eyes focused on the incredible woman in front of him. But like an oozing wound, Marissa’s perfumed scent invaded his senses just before her fingers settled in the nook of his arm, claiming him.

About the Author, T.J. Shaw:

As a child, TJ Shaw thrived in the Arizona desert. By the age of five she was riding horses through cotton fields and by eleven bought her first motorcycle, a 125cc Honda dirt bike. Growing up with teachers as parents meant traveling during the summer. Hiking down to Phantom Ranch in the Grand Canyon; fly fishing in icy rivers surrounded by breathtaking mountains; backpacking through national parks; surviving an earthquake in Mexico City; climbing the El Castillo, a pyramid in the ruins of Chichen Itza; sidestepping giant iguanas in the ancient Mayan port of Tulum; to exploring the Sagrada Familia, a Gaudi church in Barcelona, Spain were just some of her adventures. An avid daydreamer, she would lose herself in mystical worlds and far off places limited only by her imagination.

Always athletic (400m state track champion, snow and water skier, boxer, swimmer), TJ garnered a scholarship offer to play college basketball, but chose an academic scholarship to Arizona State University instead. To put herself through undergrad and law school, she lifeguarded and coached swimmers before promoting into management for a multi-million dollar recreation facility. She worked as a researcher/bailiff for a criminal judge while studying for the bar exam and ultimately accepted a position as a Deputy County Attorney prosecuting felony crimes until she decided to patrol the streets as a police officer. Currently, she tells officers what to do as the policy and procedure writer for a police department.

A writer at heart, she didn’t attempt to get published until Caller of Light. After placing (and winning) in several RWA chapter contests, she decided find a home as an author for The Wild Rose Press. If there were additional hours in the day, TJ would tickle the ivories a little more, write about her dreams, and travel the world.


Learn more about T.J. and her books on:
Website
Amazon Author Page
Goodreads

Purchase "Caller of Light" on:
Amazon

T.J. creates a visual world in "Caller of Light" with strong and interesting characters. A great fantasy, romance novel with a nice smooth flowing plot that will keep you engrossed until the end. I really can't say enough good for this book....I totally loved it!!  I highly recommend this book to all romance / fantasy lovers!

I give "Caller of Light" a 5 star rating.