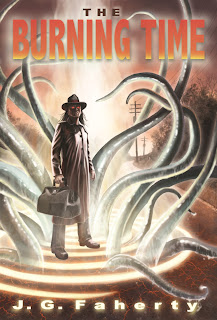 
Wherever The Stranger goes, evil follows. Wild dogs roam the fields. Townspeople turn on each other in murderous fury. Innocent women throw themselves off bridges. Swimmers disappear, victims of a deadly beast that haunts their waters. And the worst is still yet to come. The Stranger plans to open a gateway to the nether realms and release the Elder Gods to bring forth Chaos on Earth. Only one man knows the truth, a country mage whose family has fought The Stranger before. But can he defeat his ageless enemy before Hastings Mills is nothing but a smoking ruin and the townspeople become unwilling blood sacrifices to the Old Ones? With only the help of a young woman and her teenage son, he will have to use all of his arcane knowledge to thwart his adversary and prevent the final apocalypse. In Hastings Mills, The Burning Time has arrived.


About the Author, J.G. Faherty:

JG Faherty grew up in the haunted Hudson Valley region of New York, and still resides there. Living in an area filled with Revolutionary War battle grounds, two‐hundred year‐old gravesites, ghosts, haunted roads, and tales of monsters in the woods has provided a rich background for his writing. A life‐long fan of horror and dark fiction, JG enjoys reading, watching movies, golfing and hiking with his wife and dogs, volunteering as an exotic animal caretaker, and playing the guitar. His favorite holiday is Halloween (naturally), and as a child, one of his childhood playgrounds was an 18th century cemetery.


JG’s first novel, CARNIVAL OF FEAR, was released in 2010, THE CEMETERY CLUB, was released in late 2011. His other credits include more than two dozen short stories in major genre magazines and anthologies.

If you see him at a horror convention, feel free to buy him a Guinness.

J.G. Faherty pens "The Burning Time" in an well written, exciting plot, with extremely well developed and interesting characters. This is one book that will hook you right from the start and won't let go until your finished. I loved how the author was able to keep me guessing throughout the book, which is a rare thing to do. Highly recommended for all adult readers.

I give "The Burning Time" a 5 star rating.