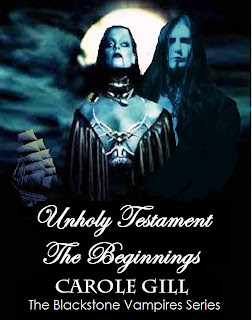 
The day Eco first laid eyes on Rose Baines was the day she discovered (The House on Blackstone Moor) her family’s savage butchery at the hands of her mad, incestuous father.

“I saw you leave the house that day, Rose, that terrible day you discovered your family butchered. I saw you…”

Eco realizing he has fallen in love with her pens a confession documenting all of his sins committed in the course of his immortal existence. The one request is that Rose reads his confession.

Rose, having become his captive, is forced to read this unholy testament of his.

From Ancient Egyptian vampire cults to Roman vampire brothels to The Dark Ages, The Crusades, The Black Death of 1348 to his meeting with child murderer and Satanist, Gilles de Rais, concluding with his wicked affair with the Blood Countess herself, Erzebat Bathory.

Eco is, if nothing else, frankly and brutally honest. The pages are filled with debauchery and advice and murder--yet, there is also love or what Eco swears is love.

The story is continued in Unholy Testament – Full Circle, to be released in early 2013.


About the Author, Carole Gill:

I wrote my first story at age 8. It was sci-fi but as both my parents were sci-fi fanatics it wasn’t a surprise.

I continued to write however life got in the way as it often does, and it wasn’t until 2000 that I turned back to writing. I joined a local writer’s workshop and was greatly encouraged to keep up with my writing and to send things out.

Shortly afterwards, I was selected by Northwest Playwrights of England for further development but found I preferred fiction writing.

Widely published in horror and sci-fi anthologies, The House on Blackstone Moor is my first novel. It is a tale of vampirism, madness, obsession and devil worship.

Set in 19th Century Yorkshire, its locales include Victorian madhouses as well as barren, wind-swept Yorkshire moors. The story is a marriage of horror and gothic romance. I think it can best be described as being gothic paranormal romantic horror.

I suppose you could say I want to put the Goth back into Gothic.

Living in the area the novel is set in, was very beneficial. Also, as a great admirer of the Brontes and frequent visitor to the Bronte Parsonage in Haworth, I found myself nearly obsessed with recreating the gothic romantic narrative.

Having been employed in a hospital which had been historically a workhouse and asylum in Victorian times, I was able to add great realism to the depiction of the asylums as described in my novel.

The next in the series, Unholy Testament – Full Circle is the continuation of Eco’s confession. It will be released in 2013.

Book 4 in the series follows that.

Now this is my kind of book! Carole pens "Unholy Testament" in a plot filled with suspense and very interesting characters. I love the way the author writes in the old world writing style that keeps you on the edge of your seat. Highly recommended for all horror, thriller, vampire lovers.

I give "Unholy Testament" a 5 star rating.