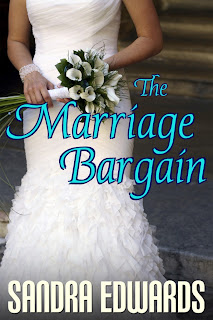 Camille Chandler is a tabloid journalist whose career is right on track–until her boss sees a curious ad in the L.A. Trades.

France’s mega-rich playboy Julian de Laurent is up to something and Camille’s boss expects her to find out what. Who knew the eccentric gazillionaire was looking to hire a temporary wife?

When Camille refuses to accept Julian’s proposal–and secretly write a juicy tell-all about the de Laurent family–she’s fired and left financially destitute, forcing her to entertain Julian’s proposal for real. But what’ll happen at the end of the contract period, after Camille has spent six months as the wife of a man she learns is capable of stealing her heart?


About the Author, Sandra Edwards:

I write in a variety of genres such as paranormal (mostly time travel and reincarnation), contemporary, and suspense. While all my tales hold an element of romance, my books often push the envelope and step outside the boundaries of conventional romance.

"The Marriage Bargain" is a good fairy tale romance that kind of reminded me of Pretty Woman. Although the flow of the book was a bit slow for me, it definitely held my attention until the end. Recommended for romance fans that are looking for a quick read.

I give "The Marriage Bargain" a 4 star rating. 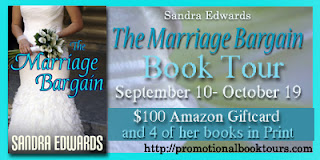