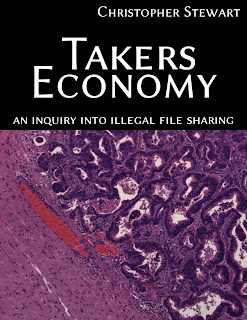 Over the last decade or so, file sharing has become a widespread phenomenon. As much as having the possibility of exchanging information almost instantaneously can represent a blessing in terms of communication and progress, it obviously opens the door to pursuits that enjoy a far less angelic reputation.

Still, the overall picture suggests that a significant number of internet users participate in such ill-famed activities. Considering this state of affairs, could illegal file sharing actually be a positive process for those downloaders, and for the collectivity alike ?

The question is generally approached from the angle of its economic impacts, but there is evidently more to the issue than its pecuniary dimension.

Takers Economy proposes an alternative look at illegal file sharing in light of the role of art in society, and in the context of the oneness of all beings and things. In addition, the inquiry explores the global picture from which the circumstances emerge, and attempts to characterize the underlying culture that gives rise to them.

Finally, the essay introduces a philosophy of endosymbiotism that aims to foster attitudes and behaviours that accord with the ethics of the inherent unseparateness of being.


About the Author, Christopher Stewart:

Christopher Stewart loves to try his hand at various artistic endeavours, but if there's one discipline he's perfecting, it must be the art of blooming late.

He has studied for a long time, played football even longer, spent a significant part of his life developing software, and invested most of the remaining hours in the pursuit of his ideal of creating meaningful music in the context of a rock ensemble. He has founded the prolific yet still album-less progressive rock outfit Poligraf in 1998 and has never been quite the same since.

He has been practising Buddhism dead-seriously since the mid-nineties, until he finally awakened to the fact that it teaches living happiness.

His interests range from psychology, physics, and philosophy, to mysticism, divination, the arts and the creative process, and, obviously, multitasking and clichés.

This book is totally out of my normal realm, but I found that Christopher pens "Takers Economy" in a way that anyone could understand and follow.  I honestly thought I would be lost while reading his essay but it actually made quite a bit of sense to me and I learned a few things along the way. This is a must read for all who would like to see an artist's point of view on the subject and those who do file share.

I give "Takers Economy" a 5 star rating.


Disclosure: I received the above product(s) in exchange for an honest review and in no way was I asked to give a positive review. I received no compensation for this publication. My opinions are my own and may differ from those of your own. This disclosure is in accordance with the Federal Trade Commission’s 16 CFR, Part 255, Guides Concerning the Use of Endorsements and Testimonials in Advertising.